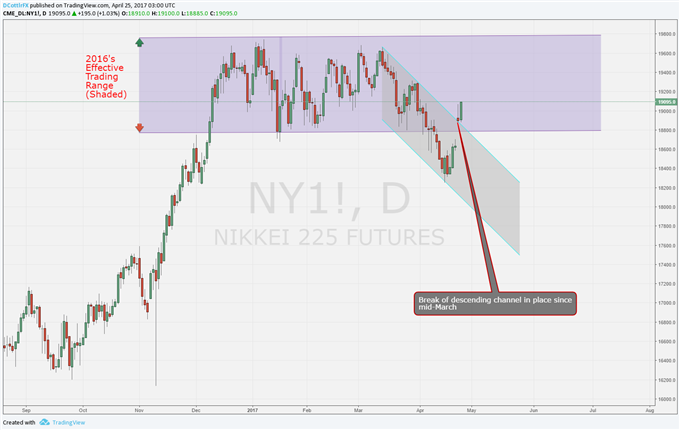 Technical Analysis: Nikkei 225 Perks Up, But Don't Celebrate Yet

The last two trading sessions have produced a modest rise in the Nikkei 225, but it’s an important one nevertheless, at least in the short term. For that rise has meant not one but arguably two upside breakouts.

Back in the old range? Nikkei 225 (Futures used for clarity).

In the first and most obvious place the index is now back above the top of a descending channel in place since the recent slide began back in mid-March. Secondly, and perhaps more importantly, the Nikkei’s latest little burst of vigor has put it back within the trading range which dominated much of this year and, indeed, much of the time since November’s climb. That topped out around the 19603 point towards the end of November.

The index didn’t relinquish that range to the downside for nearly five months, not indeed until it slipped through 18785 on April 10. Ever since the market has been nervy and lacked the impetus to get back.

Now it has, if only fleetingly so far.

The trouble is that, while both these signals are encouraging for battered bulls, they are nowhere near conclusive. Such signs of a turnaround remain for the moment blips in a pretty steep downward slide and should probably be viewed with suspicion.

If the Nikkei can re-establish itself more durably above the upper bound of that falling channel then there may be cause for hope that the index is indeed “back”. At present that bound can be seen satisfactorily below current levels at 18855.

But for the next few days discretion while matters develop may truly be the better part of valor.