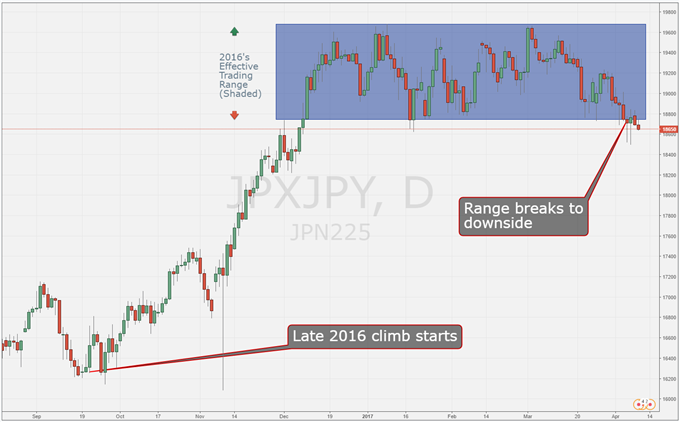 Technical Analysis: Nikkei Bulls Must Get Back in the Box

On the basis that a picture is worth a thousand words, this piece starts with one:

The chart above hopefully well illustrates the parlous state in which the Nikkei 225 finds itself. The shaded box contains the meandering trading range in which the index has stayed ever since its long climb from October 2016’s lows topped out.

Within that wide, 1000-point band there have been seven ultimately rejected attempts to beak higher and nine times when the index has built a base at or near the lower edge of the box.

But it has remained within the box. That is until late last week when it slipped out, to the downside.

As we can see the Nikkei has now strayed beyond the lower bound, which for our purposes is 18735. That’s January 17’s closing low, hitherto quite strong support and the previous closing-low point for the year. The falling trendline which was last week’s focus has only deepened, and continues as growing resistance.

If they can’t get the index back into its previous range, the bulls will likely have to fight every closing point of that long climb upward, and even a return to the October lows around 16265 is unlikely to be the end of their problems. Below them lurks the 15044 which arrested the index’s fall back in June 2016.