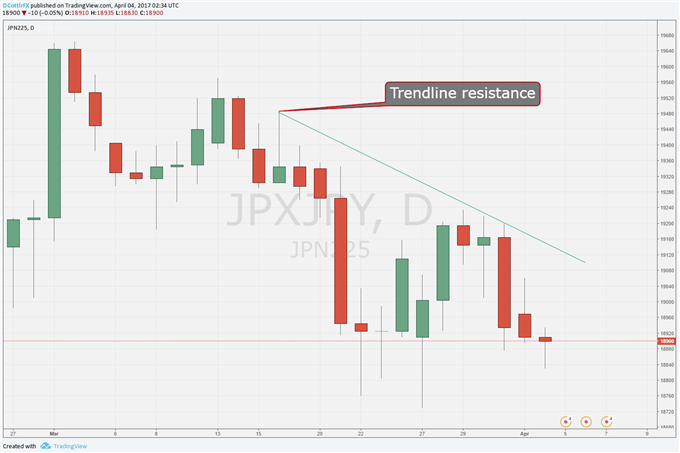 The Nikkei 225 seems to be in a spot of technical trouble, at least when looked at from a short-term perspective.

This might not be obvious. After all, the index has been meandering for a couple of weeks, notching up almost as many rising days as fallers. Nevertheless, it has remained capped by a downward-sloping trend line in place since mid-March.

That’s not good news for the bulls. At the time of writing (02:35 GMT on Tuesday, April 4) this barrier doesn’t look at all threatened. It comes in at 19150 or so, meaning that the Nikkei is 250 points below it. Given current daily trading ranges a quick retake of that point looks like a big ask.

This puts short-term focus on the downside, where clear support remans hard to sport until we get all the way back to 18823, which arrested the index’s early-February slide.

Longer-term however, the picture looks a little brighter. The Nikkei remains very well within an ascending channel which began back in July 2016. The base of that channel is miles away to the downside at around 17500. So, nothing serious to worry about, right? 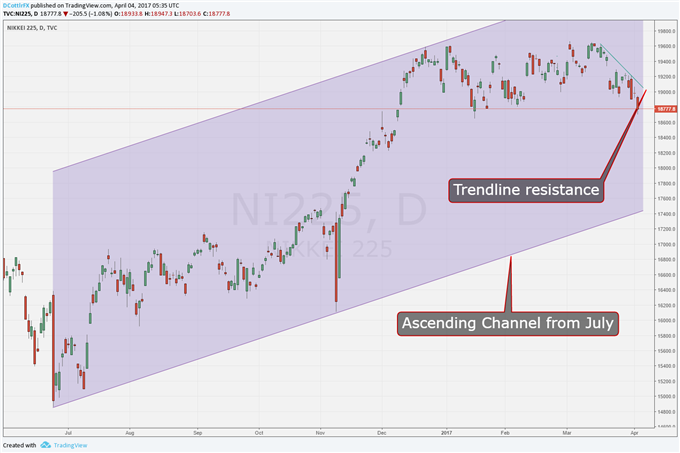 Well, clearly the benchmark’s short-term problems look a lot less serious when viewed from this perspective, but there is a caveat.

The top of that ascending channel hasn’t been threatened since the Nikkei’s long climb topped out back in January. And that top is getting ever further away by the day.

If the index is to stage a convincing return to the form it showed earlier this year, that channel top needs to get a little closer. If it doesn’t, then short-term weakness could start to look a little more like a long-term problem.

Would you like to know more about financial market trading? The DailyFX trading guide is for you.