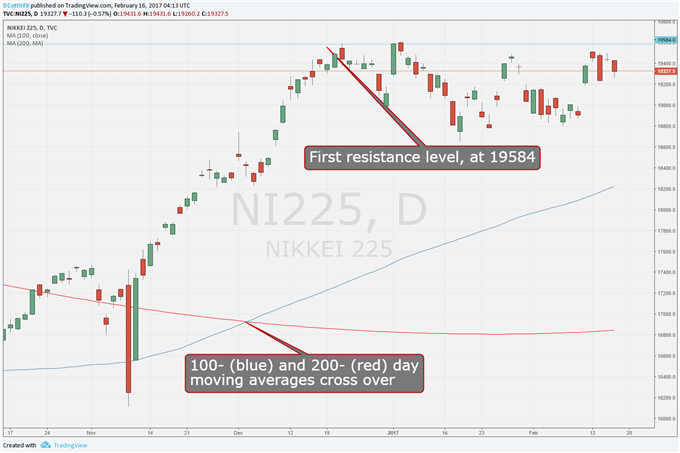 Like many of its global peers, Japan’s Nikkei 225 equity benchmark has been rising quite consistently since September 2016. However, it appears to have hit something of a barrier.

For the last four weeks, the index has failed repeatedly to get above the 19600 level for any length of time, despite repeated assaults on that summit. For times the bulls have tried, and four times they have failed.

Is this barrier becoming significant, or will it too fall in time?

Well, a look at the moving averages for the index might well suggest the latter. The shorter-term, 100-day average has been above the 200-day since they crossed over back in mid-December. That sort of cross is held to be a bullish signal, and so it proved. The Nikkei is not around 19,300. Back then it was at 18416 or so.

As you can see from the chart below the two moving averages continue to diverge, which suggests that the index could still have more upside to give. It has already given plenty since that bullish crossover but the two have diverged more sharply since, which might give the bulls reason to hope.

That sort of level would also offer investors the considerable psychological support of seeing the index back above 20,000. However recent history suggests that it doesn’t stay up there for long.

Would you like to know more about trading the financial markets? The DailyFX Trading Guides are here to help you get right there.