DAX and CAC Technical Analysis for the Days Ahead

DAX and CAC Technical Analysis for the Days Ahead

The DAX is coming off the July low after getting pummeled on Monday, narrowly missing a test of the 200-day moving average at 14931. The bounce is on the verge of filling the Monday gap-down, after which the outlook becomes less clear.

Was this a meaningful low we just saw that leads the DAX back to the prior record highs over 16k, or will the bounce lose steam and set the market up for another dive lower?

That is hard to say at this juncture, some time will be needed. If the DAX keeps on keeping, then resistance right around 15800 (+/- 15 points) could soon come into focus. It’s a level that began back in June that was reinforced as having meaning in July and just as recent as last week.

If the DAX stops around 15800 or lower, we may be seeing a broader topping formation moving towards maturity. The time spent since June where price action is generally churning could mark a distribution top that resembles a head-and-shoulders pattern. It’s too soon to get into the weeds on that scenario, but one worth keeping in mind for later.

It is possible we see the DAX turn down after the Monday gap is filled up to 15490. If this happens, then watch the Monday low at 15019 and the rising 200-day that lies just beneath at 14931. If that breaks then risk-off is taking grip and a broader sell-off could lead much lower. If support holds as a test and price action comes back strongly, then it may provide some conviction for longs.

All-in-all, the outlook at this very juncture is not clear – providing some time and being patient appears the most prudent move right now. 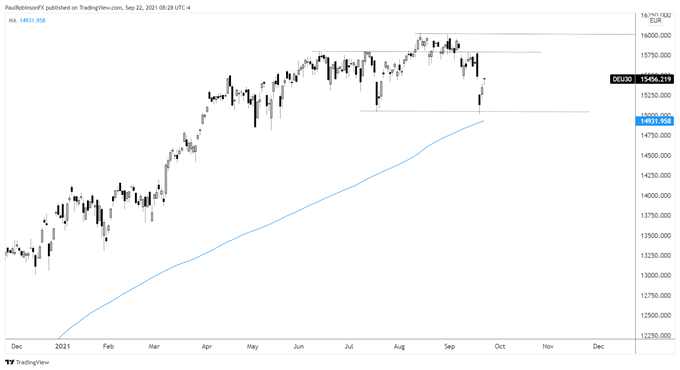 The CAC is coming back with some vigor, having already surpassed its Monday gap. This has a slope in focus that has seen the French index ride along for much of the month so far. Watch for a little weakness to develop as it gets tested. A breakout through would be encouraging and open up a path towards 6784.

The same fate on the downside could of course await the CAC as it does the DAX, but it does appear to be set up a bit better to hold for now; 6389, the Monday low would be first up in focus if weakness sets in. 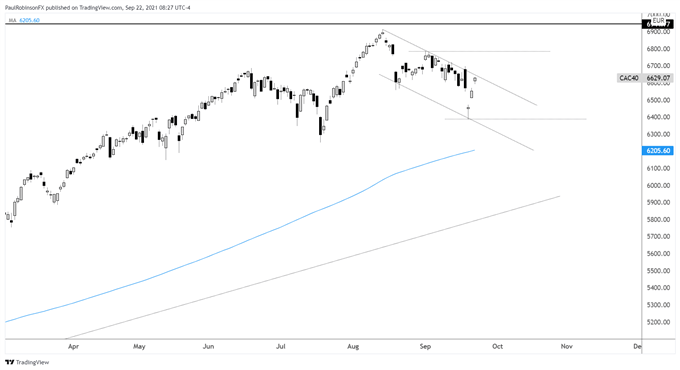