The DAX is testing the October trend-line that was reaffirmed as a level of support last week when the index broke hard but quickly snapped back. Today’s selling is thus far aggressive and could get worse, likely depending on how the U.S. markets fare.

For starters, the line will be treated as support until broken. With that said, would-be shorts will likely be best served waiting for a break of the line and the most recent low on the line which falls at 14845. A decline below there is likely to set into motion a move down to the March 2020 trend-line.

For would-be longs looking at recent price action as a sideways move before a potential drive to new highs, the October trend-line offers a bit of a backstop from which to assess risk on longs. If the DAX can hold again it would add even further validation to trend-line support and keep the top-side in play.

Either way the line is important for shaping a trading outlook as we roll through the rest of the week and beyond. 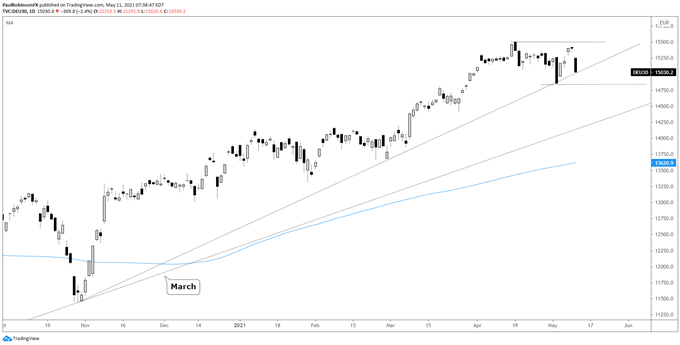 The CAC 40 is breaking through the bottom-side trend-line of a channel that has been in play since early February. But so far the breach isn’t super significant and by day’s end it may very well end up only an intra-day occurrence.

For the break to be official, a daily close below the lower parallel is needed. In the event it does, then look for the 2020 high at 6111 to come into play in the days ahead. Should we see the CAC rally to close above the line today, then the channel remains intact and a new high may be around the corner soon. 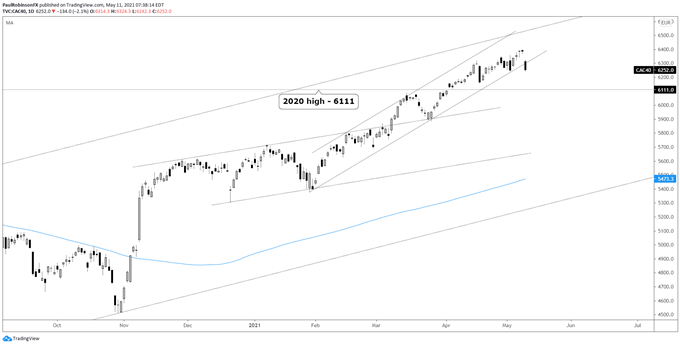