European stocks were racing higher recently, but have been hit with a bit of a setback. Not to be unexpected, nothing goes up or down in a straight line. The DAX is sitting on an interesting slope, the upper parallel of the rising channel starting back in December.

The upper parallel isn’t viewed as an extremely steadfast source of support, but is viewed as support nevertheless. If it holds here after acting as resistance in March, then any subsequent tests following will be taken more seriously. With that in mind it is will be interesting to see if it can put a floor in here.

If it can hold and a consolidation period develops, it may offer would-be longs another opportunity to take a solid risk/reward trade. Looking higher there isn’t resistance levels to speak of. Should the slope fail then the next line of support comes from late October and the March high at 14804. These two could coincide providing a solid confluent level of support. 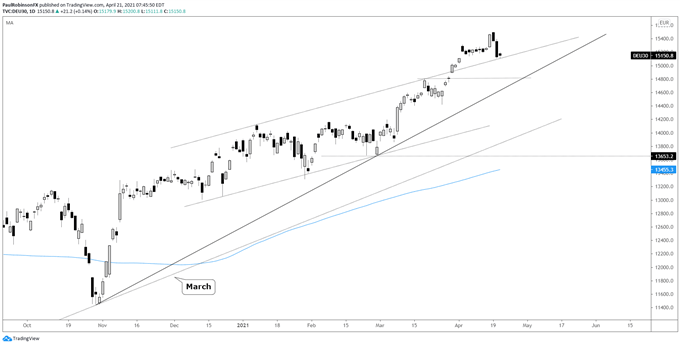 The CAC 40 has been the stronger of the two major European indices, with it zooming higher in its bid to play catch up to the DAX. The nearly one-month run hit a snag, but quickly has important support in focus just below.

The 2020 high at 6111 is nearly in alignment with the lower channel line dating to the end of January. The channel structure is solid, and as long as the CAC remains in it then the bias remains firmly higher. A break beneath the lower parallel and 2020 high would be reason to look for a larger retracement. Looking higher, there isn’t anything substantial in terms of price resistance until the 2000 all-time high at 6944. 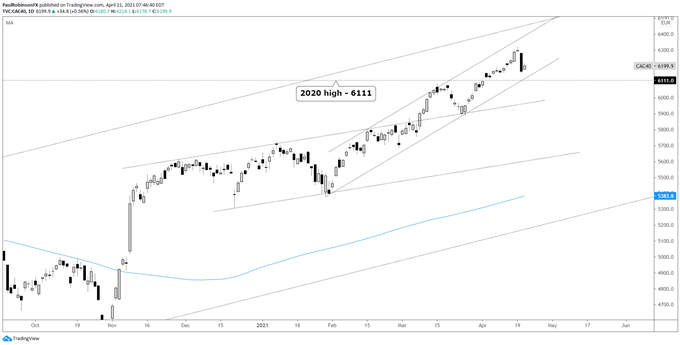