DAX 30, CAC 40 Charts Flimsy, but Not Outright Bearish (Yet)

DAX 30 bending its uptrend but not outright bearish yet

Yesterday, the DAX snapped back nicely by nearly 3% as it found its footing around the 200-day MA. But can it maintain its footing now that it has broke away from the confines of the neat uptrend it built off the March panic low?

Breaking trend support doesn’t seal a market’s fate as having to reverse direction, but it can go to weaken its case. With the DAX lagging behind the stronger U.S. markets and falling further behind, should markets in the States roll over then we would likely see the downside accelerate in Europe.

But so far even though we are seeing some fracturing in the global risk trade, U.S. stocks remain strong and thus a boon for at least keeping the DAX/CAC from falling apart. Continue to keep an on the 200-day at 12207 on the downside and the resistance around 12950 and the corona-gap up to 13300.

Recommended by Paul Robinson
Are indices your thing? Check out the Q3 Forecast.
Get My Guide 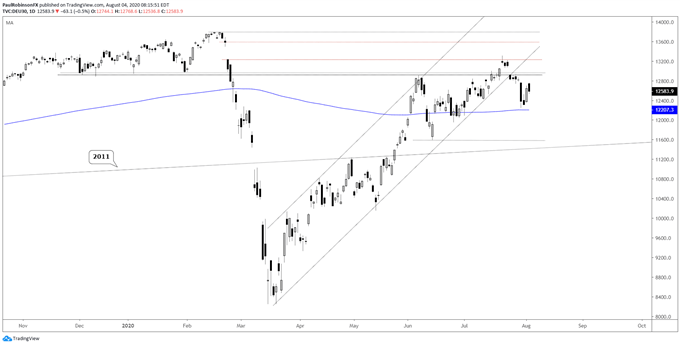 CAC 40 likely to lead on the downside should stocks slide

The CAC is in worse shape than the DAX, making it even more vulnerable should we see global risk sentiment sour. After breaking the March trend-line it is trying to hold onto support around 4800, but should that fail keep an eye on the area right around 4690, as it was a prior swing high turned support.

On the top-side a test of the underside of the March trend-line may be in order, followed by a developing trend-line off the February high. They are in relatively close proximity to one another over the 5k mark.