The DAX rose sharply to start the week on a global surge in equities, but it doesn’t really get it any further than where it was a couple of weeks ago. The index is back testing a familiar line of resistance via the underside of the 2011 trend-line, where the recovery DAX began having its greatest difficulties since the recovery began.

We might see an attempt to forge on ahead here a bit and fill the March 6 gap up to 11542, but that may again prove only to be short-lived strength. Overall, the thinking is that the DAX is still vulnerable even if it is hanging on. The most recent hold was around 10200, an area noted before as key support.

Another round of weakness could have this level under siege once more, and we will continue to respect it as support, but should it break then we could see a decent amount of selling come in. However, before getting ahead of ourselves we need to first see how the resistance close at hand is managed. Risk/reward favors sellers at the moment.

Recommended by Paul Robinson
Are indices your thing? Check out the mid-Q1 Forecast.
Get My Guide 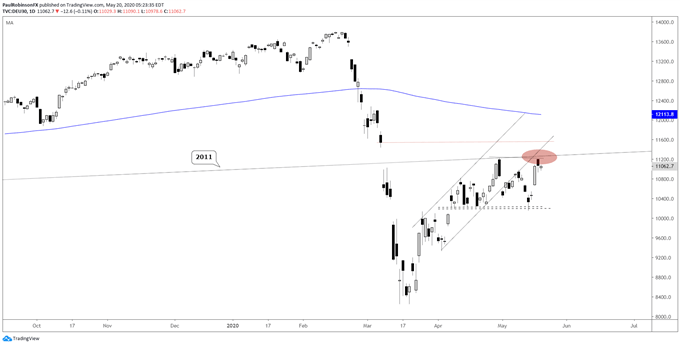 CAC 40 continues to be a laggard

The French benchmark is lagging, not as badly as in Spain or Italy, but the CAC 40 is nevertheless lagging behind the German stock market. The recent swing high at 4719 might not even get tested even if the DAX tries to push on higher a bit. A down-move will have focus on 4194 first as support followed by sub-4k. Higher levels may still be in the works but not likely to come easy or be sustainable.