Last week the DAX broke a corrective wedge off the March low, a pattern that was thought to lead to a breakdown in prices if the support around the 10200 level could also break. Indeed, though, this was not the case, and the level held after a couple of attempts at breaking.

The lift from this important support area has seriously dented the bearish wedge-break in favor of seeing the DAX maintain current levels and try and rally to a new set of highs post-March low. A breakout above 10820 will have the gap from March 6/9 in play from 11032 up to the fill at 10542.

Right in the thick of the gap is a trend-line from 2011 that broke during the corona-induced chaos. These levels are also at about the half-way point from the top to the bottom. It will be interesting to see upon a rally to these extended levels how the market behaves.

For now, as long as the lower-bound of the range at 10198 holds, then at the very least the outlook is neutral, and likely bullish. A break of support will be cause to flip this bias.

The CAC hasn’t been as buoyant as the DAX, but is still set up for higher prices. Right now the index is creating an ascending wedge, positioning it for higher levels above 4577. The March 11 gap at 4610 is next up to watch as resistance, but is just beyond the breakout point of the wedge so it probably won’t put up much of a fight.

The March 6/9 gap and 2011 trend-line start at 4924 and run up to a fill of the gap at 5139. That will be quite a run from current levels to achieve, but nevertheless if we see the wedge break the trading bias will become bullish. A breakdown through 4318 will likely have the CAC rolling back downhill. 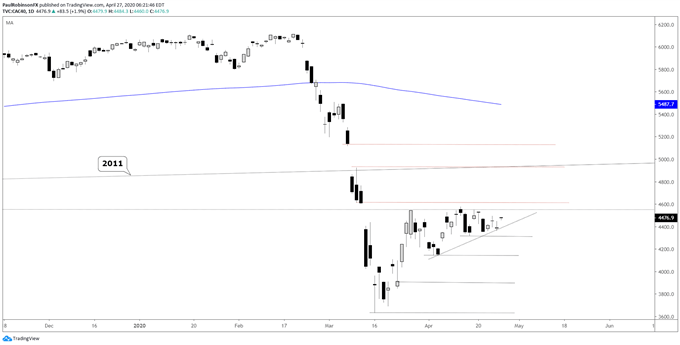