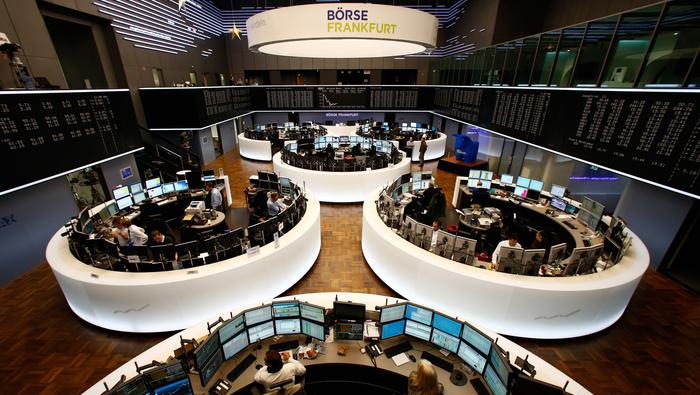 DAX 30 Rally May be Nearing a Turning Point

DAX 30 recovery may soon be at risk of folding

The recent run off the March low hasn’t been without its bumps, but so far it is has resulted in a material set of gains of over 20%. However, given the damage in place it’s only a small start to fixing a larger problem. Expect there to be further set-backs even if the market is to continue to trade higher. If the turn hasn’t already begun as of yesterday, it could come relatively soon.

Like the US indices, the March 12 gap was filled yesterday, which was the first target on the top-side to watch as a potential spot for U.S. indices and the DAX to turn lower from. Should yesterday’s high at 10590 get broken, then there are some more levels to watch starting around 11000, created by gaps and the trend-line from 2011. That would still be quite a move from here, and if those lofty levels are seen then it seems as though that would be about the max the market could squeeze out before another swoon developed.

Looking at the near-term picture, though, there is potential for the move to be over or just about over, and a rising wedge pattern (visible on the 1-hr hour) to come to fruition ad trigger. If this pattern fully forms and the underside trend-line is triggered, then look for another attempt by the market to dive lower.

Dialing back, the low last month was created around a very, very long-term trend-line extending up since 1982. It passes under the massive 2003 and 2009 lows. All three are very important connecting points. Furthermore, the tops that proceeded the 2003 and 2009 lows, 2000 and 2007, were also very significant bull market highs, and intersect with the 1982 trend-line. This makes the March low at 8255 extremely important for the broader outlook.

It would seem quite possible that this low stays in place for a while before perhaps giving way to selling pressure. An event we will discuss should it become relevant.