The DAX 30 remains in a short-term consolidation phase, one that began last week just after new record highs above 13596 were notched. There is a top-side trend-line part of an expanding wedge running over from November, but given the recent break to record levels and fact the trend-line is heading in the same direction as the DAX, it’s not seen as that threatening.

From here where can the market go? It’s hard to say with nothing to stand in the way of the advance. But as long as the breakout levels hold and price action remains bullish, so does the outlook. Even if that means being bullish in the face of poor Euro-zone, German data and the coronavirus. Those things are having little impact on how equities trade. Until they do have a meaningful impact, the trend is your friend.

The CAC 40 is still lagging behind the DAX, but is also putting together a nice little consolidation period. It comes right around the January high of 6109. A breakout will quickly have the 2007 peak at 6168 in focus as the next level of resistance. A breakdown below 6028 will give short-term pause at the least to a bullish outlook.

FTSE is chopping around, avoidable for now

The FTSE has been nearly impossible of late to get a handle on, and while it’s not the easiest index to trade it has become even more difficult than usual. It is holding around the 200-day right now, but with the index between recent support at 7275 (and a trend-line from December) and resistance at 7547, the short-term outlook has no directional bias to it whatsoever. For now, there are other markets with cleaner set-ups, this one I’ll wait on for better clarity before running with a trading bias. 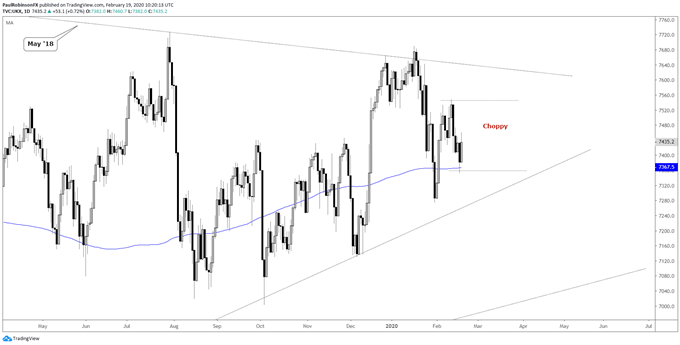