After surging in early September, the DAX 30 has experienced a directionless journey sideways in the second half of the month despite dovish promises from the European Central Bank and relatively cool US-China trade tensions. Nonetheless, the Index struggled to surpass horizontal resistance around 12,460 and was refuted again on Monday alongside disappointing PMI data. Together, the headwinds worked to successfully stall the DAX, resulting in the Index’s worst daily return since August 23. 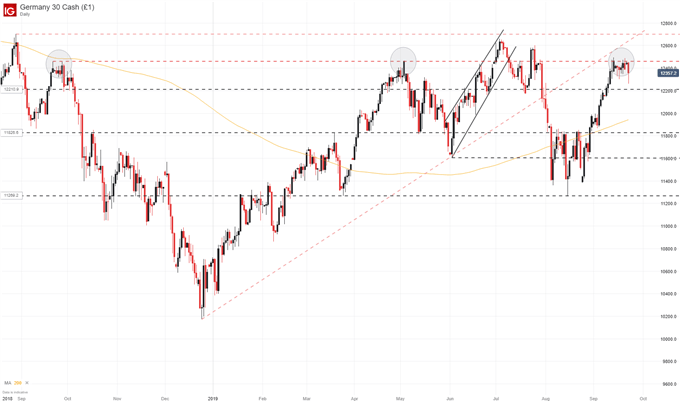 Faced with recession fears and technical resistance, the DAX 30 may remain directionless for the time being as other themes weigh. To that end, German automakers recently stated a no-deal Brexit would be “catastrophic” for their industry. Since the German auto industry accounts for such a sizable portion of the company’s manufacturing and exports, any bearish development could quickly translate to the Index overall. With the October 31 headline approaching fast, the uncertainty could help keep a lid on the Index’s price.

Consequently, short-term traders could look to capitalize on nearby technical levels as the Index may potentially fluctuate between them. To be sure, the horizontal trendline at 12,460 will pose the first zone of resistance – evidenced by its ability to stall price in September 2018, May 2019 and again this month. Subsequent resistance may be offered by the ascending trendline from December – slightly beneath 12,600 – but a close above 12,460 would be required first.

Thus, horizontal support around 12,200 could look to offer buoyancy in the interim. The Index’s long lower wicks on September 17 and September 23 are an encouraging sign for bulls but are somewhat undercut by the ability of bears to print lower lows. Similarly, IG Client Sentiment data reveals a recent surge in long-positioning which could suggest the DAX 30 is due for a slight continuation lower. 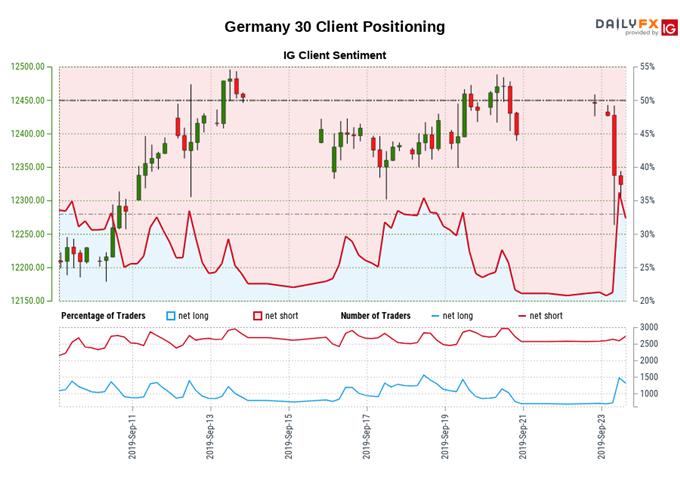 As the Index looks to gyrate between 12,200 and 12,460, the 200-day moving average will continue to close in on the current trading price. Coupled with the ECB’s dovish stance for the future, the longer-term picture for the DAX is an optimistic one – but bulls should watch for further consolidation in the near term. That said, a confirmed break beneath 12,200 would work to undermine my longer-term bullish bias. In the meantime, follow @PeterHanksFX on Twitter for further updates and analysis.