To see our intermediate fundamental and technical outlook for the DAX & Euro, check out the DailyFX Q1 Forecasts.

DAX back around 2011 trend-line, recent swing-high

This week’s push higher has the 2011 trend-line back in focus, a line that has clearly been influential since October. The breakdown in December furthered along the broad head-and-shoulders top, but with the rally off the low to end the year and U.S. market strength we’ve seen the index put up a solid series of retests recently.

In the near-term, current levels up to 11372 could prove problematic for the DAX, but with overall risk appetite still intact in Europe (i.e. – CAC) and quite strong yet in the U.S., we might not see price roll over just yet.

The trading bias right now is fairly neutral given the opposing forces. For those seeking very short-term trades (intra-day) the market is offering a little back-and-forth volatility, but for swing-trades beyond a couple of days conviction is lacking. 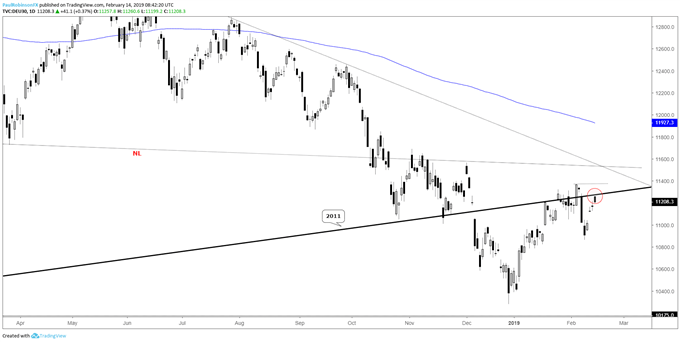 The French index has been quite a bit stronger than its German counterpart, but it could slow down with sizable resistance from here until around 5250 standing in the way. Several swing highs and lows appear for the next 150 points. Trend structure will remain firmly bullish as long as the channel off the December low remains intact, so even if we see a turn down from resistance it might be a dip bought rather than furthered along into a full-blown sell-off. 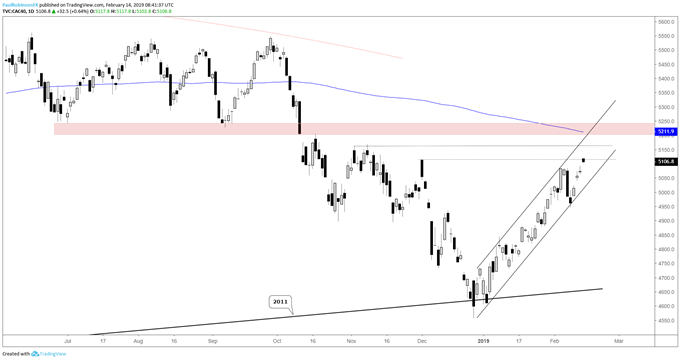