To see our intermediate fundamental and technical outlook for the DAX & Euro, check out the DailyFX Q1 Forecasts.

DAX around 2011 t-line, but channel keeps it pointed higher

For the past couple of weeks, I have been discussing the retesting of the 2011 trend-line, and while it has thus far kept a lid on price, only trading 60 or so points higher than where it was on Jan 18, sellers have been absent.

Since bottoming at the tail-end of December a clear upward channel has been developing and keeping the German benchmark pointed higher. It broke on an intra-day basis yesterday, but was unconvincing as it got a little help in recovering late-day along with the U.S. markets.

The idea here is that resistance is to be respected as such, but betting against the DAX will require a violation of the still bullish near-term trend structure. A clear break outside of the channel and close below yesterday’s low at 11132 will be viewed as a positive for those looking to take advantage of weakness.

If, however, we don’t see a breakdown then the DAX may try and make yet another push higher towards levels carved out in Nov/Dec in the region of 11600.

CAC extended, has resistance, but channel also keeps it bullish

The CAC has been exhibiting significantly more strength than the DAX, now pushed up against a trend-line from October. And like the DAX, unsurprisingly, it is maintaining a bullish tilt in a defined upward channel. We’ll have to see if the bigger DAX can turn down and break its channel, and if it does, then look for the CAC to follow. Due to the long-term trend-line the German index is up against and relative weakness, it is the preferred index to short. 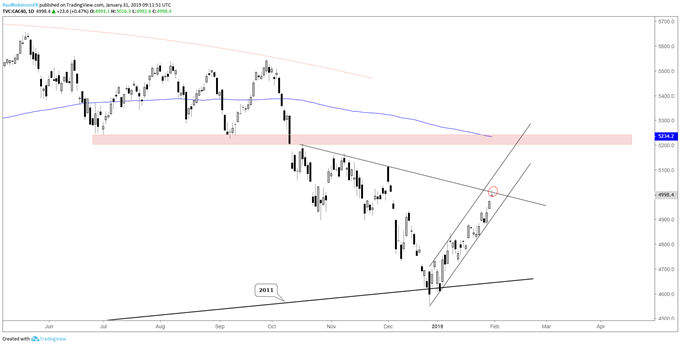