DAX bounce isn’t viewed as likely to last much longer

The DAX has for now successfully held the long-term trend-line dating back to 2011, and while it is lifting modestly, strength is at odds with general trend and tone considerations. Not far ahead is a small trend-line to contend with crossing over recent peaks created at the neckline of the long-term head-and-shoulders pattern.

Even if that line is breached the neckline of the H&S formation is just beyond and is likely to be staunch resistance for a market that is on its heels. On a touch of either form of resistance, a shove back lower should give shorts the upper-hand again in the near-term or longer.

A push lower from either current levels or the aforementioned resistance will once again have the 2011 trend-line back in play. It is a sort of tug-of-war between neckline resistance and trend-line support, but from where I sit the broader topping pattern still holds to be the more important technical event. This isn’t just any head-and-shoulders, it’s one that runs back to June of last year – it’s massive in size and suggests the market is in for a large decline.

Nevertheless, we must still respect the trend-line for what it is – support. More time playing ping-pong between top and bottom-side thresholds may be in store before an eventual break. Keep an eye on the U.S. markets as they try to regain their footing, as a break lower with force may have other global markets facing new lows in the current down sequence, including the DAX finally breaking the 2011 trend-line. 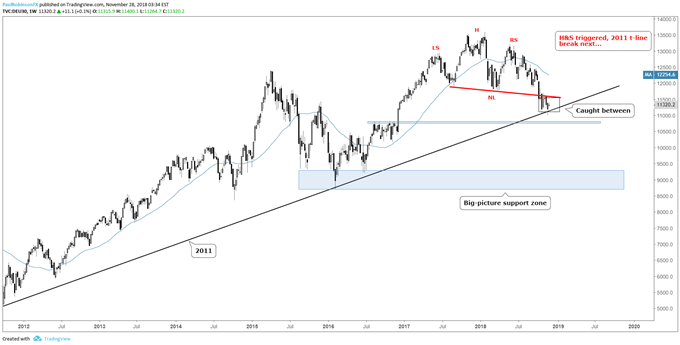