DAX broke below Feb ’16 trend-line, but brought no more selling (yet)

Last week, when we looked at the DAX it had just grazed the trend-line running up from the February 2016 low, a t-line of importance given the starting point is the end of the last significant correction in the bull market beginning in 2009.

That slight graze, though, turned into a full break on Wednesday, but despite the break coming rather swiftly there has been zero follow-through so far. Yesterday’s rally and today’s strength puts a retest in question, but how things play in the days ahead are likely to determine if the August 15 breakdown was a false one.

A close beneath the June low at 12104 will be viewed as confirming the break of the Feb ’16 trend-line and continuing the path of least resistance lower. At that juncture, not only will price be well below long-term trend support, but a lower-low will have developed in what could become a momentum-building bearish sequence off the May high.

With that, then, the intermediate-term bearish sequence could turn into a longer-term development. The April 5 gap down to 11957 is likely to get filled along the way to a test of the neckline of a broad developing head-and-shoulders dating back to June of last year. We’ll discuss its implications should we see the neckline broken in the weeks ahead…

For now, the DAX is trading just above the Feb ’16 trend-line and the notion of a retest is quickly coming under fire. If the market can recapture the t-line, then a move higher could be in the cards. Generally speaking, risk appetite is in OK shape with the U.S. indices hanging out near record levels, so that may help keep the DAX buoyed.

Without any market-moving themes, summer doldrums are likely to dominate trade, and that could mean some fairly meaningless whip-saws. Bottom line, if a good trade isn’t there don’t force the issue. In just a few short weeks a busy period of trading will arrive and present plenty of good-looking opportunities. 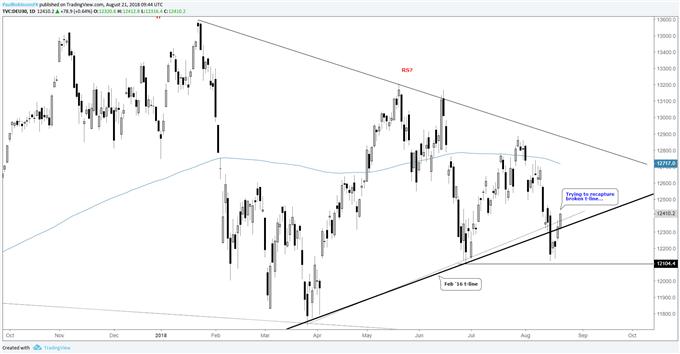