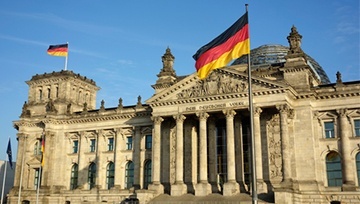 Last week, the DAX broke the upward channel from the late-June low, which as we noted in the weekly forecast over the weekend, puts the index in a semi-precarious position. Yesterday, the market attempted to trade higher, but once it nearly filled the 8/2 gap a sizable rejection ensued, keeping pressure on.

The price structure on the short-term time-frame (hourly chart) is carving out a head-and-shoulders pattern, and while not possessing the most symmetrical properties it’s good enough should it trigger. That is, price needs to decline below the neckline of the pattern before it can be considered validated.

Last week, we saw a textbook example with the S&P 500 as to why these technical patterns require a confirmed break of the neckline before we can run with their downward bias. The neckline is considered support until it’s broken, and as it turned out with the SPX no break of support meant no short which meant no losses on fresh shorts in anticipation of the pattern following through. Which turned out to be a good ‘no break’ as the S&P used support to springboard higher.

With that said, a solid break through the neckline is needed before a bearish bias can gain momentum. In the event of a breakdown, we could be quickly looking at the February 2016 trend-line, currently residing in the high 12200s. No break, then no trade.

At this time, the market is pushing higher and may attempt to leave behind the possibility of an H&S formation. Ahead, though, the 200-day (which acted as resistance back on 7/18) and a recapture of the lower parallel will be needed if more upside is to be seen. 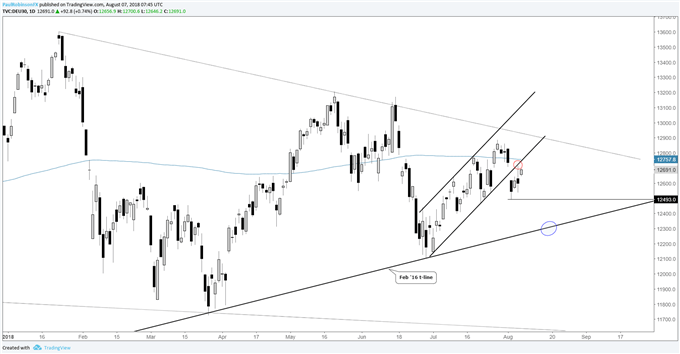 Check out this guide to learn 4 core tenets for Building Confidence in Trading.

One thing to be mindful of as we continue to head through this month. Trading can be relatively light and on the sporadic side in August in the absence of a catalyst (typically negative), as market participants leave the desk for vacation time. This can lead to a less-than-desirable trading environment, so if trade set-ups aren’t there, and this should go for anytime of the year, then don’t force the issue…