DAX Technical Analysis - Stepping Closer and Closer to the Edge

Last week, then again yesterday, the DAX tested the trend-line rising up from the February 2016 low. This trend-line might sound familiar for those of you who regularly follow global indices. It’s considered a very important threshold for the S&P 500 (which it is trading just above now). This trend-line starts at the end of the last significant correction of the bull market dating back to March 2009. It’s been tested numerous times over the past two-and-half years in both the U.S. and German benchmark.

A break of trend-line support won’t necessarily usher in massive selling just yet, though. But it would put the DAX in position to test the neckline of the head-and-shoulders pattern now spanning a period just over a year. A year-long topping process is nothing to take lightly, as its implications are for a substantial bear market decline, perhaps nearing another 20% or so from the time it breaks the neckline (which isn't until ~11650). 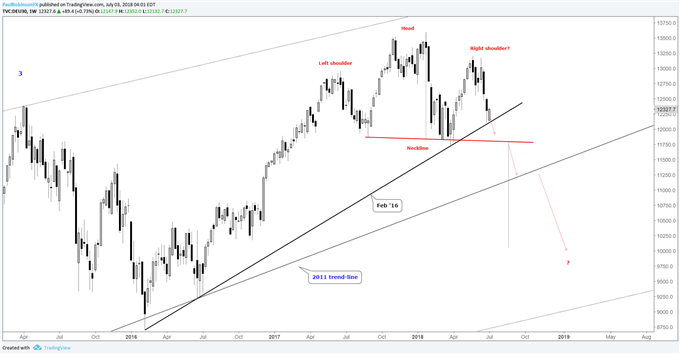 However, before we go drawing any further conclusions, we’ll give trend-line support the benefit of the doubt until broken. A close below and 12104 will be needed before more selling can kick in, but if we see these thresholds broken then look for a gap-fill first down to 11958, then a test of the March low and ultra-critical neckline.

On the top-side, if the DAX can get into gear, the first level to watch is 12440, followed by an important zone from around 12550 up into the low-12600s. It’s possible if summer trading conditions begin to dominate trade that we see the market bobble around between the 2016 trend-line and 12550/600s area.

All-in-all, the thinking is that we are in for a big test soon, but if that doesn’t materialize we may be in for a summer lull. The next couple of weeks is viewed as a potentially very pivotal period.

Check out these 4 core tenets for Building Confidence in Trading.