Start building your knowledge base today with DailyFX Trading Guides

On Friday, the DAX put in a closing print below support in the 12900s, but it came with a caveat. The drop happened into the close of the session on political headlines in the U.S., which sunk European markets without them having a chance to recover with U.S. markets. Which they did. As a result, yesterday’s gap higher reflected a readjustment for the ‘dip-and-rip’ which took place during afterhours.

Nevertheless, the DAX is sitting with a weak technical backdrop as it continues to lack any power to the upside despite testing a fairly substantial area of support. The area around the bottom of the 2+ week range continues to hold, but for how much longer will that be the case?

Another strong closing print towards last week’s low or below it is seen as a reason for the market to find additional sellers, with the next level of support arriving at the July swing-high at 12676. This appears only minor in significance, with the next real area of interest clocking in closer to 12500 where the June 2016 trend-line and 200-day MA are quickly rising to a point of confluence.

A close above 13209 remains viewed as needed if the DAX is to get into gear and trade back towards the previous record high. We may see some more chopping around before a resolution of the range, and on that we’ll wait patiently until further clarity presents itself. It could be today, it could be a week or longer. 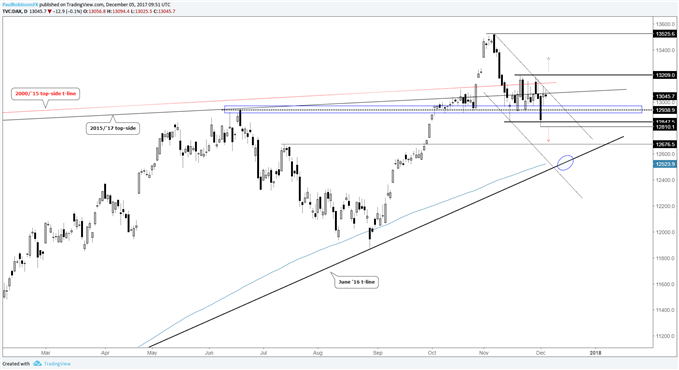