Find out in the Q3 Forecast what’s driving the DAX and Euro.

Since Friday the DAX has been in ‘bounce-mode’, but still stuck within in the context of a triggered ‘head-and-shoulders’ (H&S) pattern. It’s been a bumpy ride lower, but nevertheless rallies for the past couple of months have been selling opportunities. In the weekly forecast, we noted that if ‘risk-off’ doesn’t grip markets then the bias was still for lower prices but there are levels from which the market could find temporary support.

The first level came at the April low around 11940 on the Friday gap-down. The bounce has held a decent amount of power so far, the strongest since the early-part of July, however; the market still remains in a firm trend of lower lows and lower highs. This morning, so far, we are seeing the DAX turn down from the trend-line off the mid-July swing-high. While price is above the neckline of the H&S formation, a bearish outlook won’t truly be undermined until we see a recapture of not only the current trend-line hurdle, but also the one of the June high, as well as a break above the steadfast area of resistance surrounding 12300.

Looking lower on renewed weakness, the Friday low aligns roughly with the 200-day, so the area around 11940 may again provide a backstop on any slide which develops. Beneath there a minor swing-low from March at 11850 comes in as the next level, followed by a measured move target for the H&S formation of roughly 11600.

Looking ahead to potentially market-moving fundamental events, we have the minutes from the last central bank meetings for both the FOMC and ECB on Wednesday and Thursday, respectably. For details on timing of these releases and other data, please see the economic calendar. 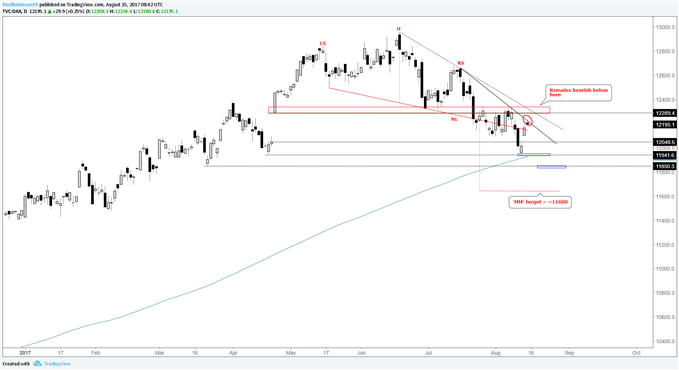