If the Euro Weakens Will the DAX Find Life?

Find out in our Q3 Forecast what’s driving the DAX and Euro.

The inverse correlation between the DAX and the euro isn’t a secret (21-day is at -90%), but for those who may have let it slip to the back of their minds they were reminded on Friday with the release of the U.S. jobs report. While by the end of the day the euro had a relatively large decline, it was the initial reaction to the upbeat jobs report which showed how jumpy traders are. EURUSD declined about 40 pips in the minutes following and the DAX spiked 60 points and never looked back. The DAX on an intra-day basis was even leading early-on. A telling story about what a big move out of the euro could potentially do to the DAX. The euro is set up for weakness as we discussed here and here, so on that we’ll want to pay attention to how German stocks react should a bearish euro thesis come to fruition. Keep in mind, though, correlation only accounts for the directional relationship; the magnitude at which the two markets move is unaccounted for. For example, the euro could decline aggressively and the DAX only rises modestly. Also remember, correlations can fade without warning. But overall, it’s one worth paying attention to.

Moving on the to the technical picture of the DAX…

Last week, we expressed our ongoing bearish bias for the DAX, with expectations for it to continue lower after breaking the neckline of the bearish ‘head-and-shoulders’ pattern. This could still be the case as it still has resistance to clear and a downward trend structure in place since June it must break. The H&S formation is still valid despite the market trading back above the neckline. It won’t become invalidated until we see a push above the June trend-line and right shoulder over 12600. A move above the trend-line will likely be enough for us to abandon the pattern, though.

Yesterday, we saw the area around 12300 turn out to be problematic as suggested would be the case in our outlook heading into the week. Up to around 12340 will be important for the near-term bias. Stay below, neutral to bearish. While a break above could bring in some top-side momentum with the June trend-line quickly coming into focus. Support comes in at the bottom of the recent congestion period just under 12100, not far above the French election gap-fill at 12048. Support below there is followed up by 11941, 200-day at 11892, then 11850. 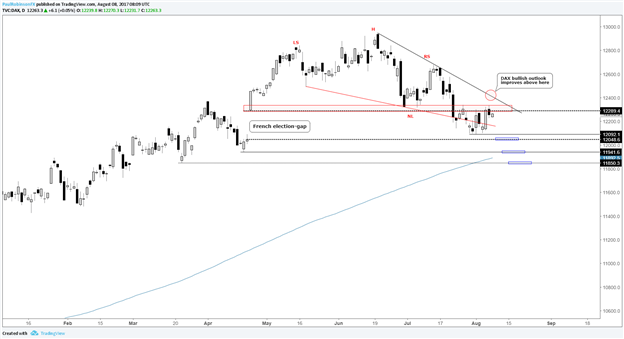