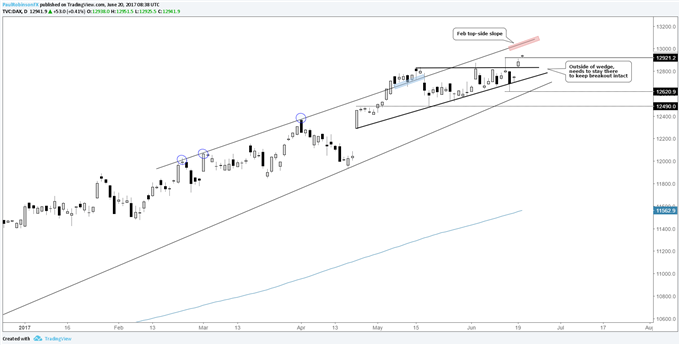 After a couple of intra-day fake-outs (one higher, one lower), the DAX finally closed outside of the ascending wedge we’ve been looking at as of late. The bias prior to yesterday was for it to break higher when taking into consideration wedge-type and trend, but nevertheless waiting for a confirmed close outside of the pattern was the ‘textbook’ approach. Today, we are seeing a continuation move inch above the 6/14 reversal-day high (the first head fake). As long as the DAX doesn’t sink back inside of the wedge (close near 12800) and negate the breakout, higher prices are expected.

We’re treading in record territory, but that doesn’t mean there isn’t still resistance. Enter the top-side trend-line extending over peaks since February. It’s been on our radar for some time now, and could soon come into play with a bit more extension from here. If we see a power-move out of the market then it may only be merely an annoyance for the market to trade through, but given momentum is generally lacking in global equities the expectation is we will see it act as a minor hurdle at the least upon arrival (assuming the market gets there). The line currently arrives around 13050, but is obviously a moving target as it slopes higher with the trend.