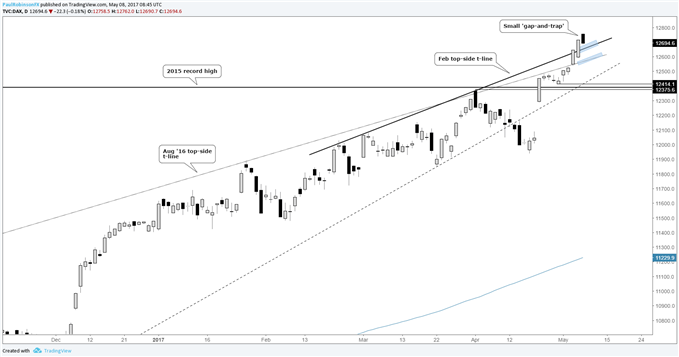 Can the DAX continue its rise during the rest of Q2? See what our analysts have to say in our quarterly forecasts.

We have a winner in France. It was a landslide victory, with Macron receiving 66% of the vote and Le Pen only 34%. Major polls were generally showing a gap of 15-20% between the two candidates heading into the weekend, so while they were generally right, they weren’t as bullish on Macron as what the actual vote revealed.

As discussed in the weekly forecast, it looked probable that there might be a bit of a ‘sell-the-news’ scenario on a Macron victory given the sharp run-up we saw in the CAC 40/DAX leading up to yesterday’s outcome. This morning, the DAX gapped higher by about 40 points and quickly sold off to fill its small gap and then some. In France, the CAC 40 gapped to a lesser extent and is currently down the on the day by about 60 bps at the time of this writing. Buy the rumor, sell the news. Although, admittedly, on this end we were looking for a larger 'gap-and-fill' situation on an initially euphoric response to the outcome.

Moving past the relatively benign reaction to the news and on the to the technical landscape, the DAX is strong as it sits in record territory. The two top-side trend-lines we had penciled as potential resistance have both been overcome. While minor in nature, had the market reacted to them with any kind of force we would have sat up and paid attention. Now that the August and February t-lines have been crossed we will look to them as support. Looking higher, nothing but space in terms of resistance. It doesn’t mean the market is ready to run away, it just means we don’t have any good levels or lines of resistance to lean on.

For now, we will continue to respect the trend and look to the market to hold support on dips, and until we see bearish price action set in we will run with this bias.