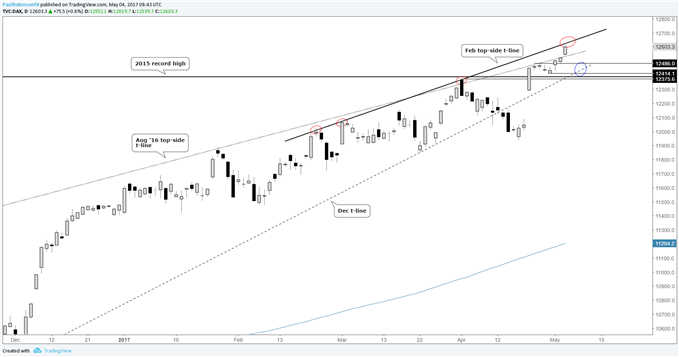 DAX: Rallying Out of Consolidation, Watch This Line of Resistance

When we took a look at the DAX on Tuesday, this was our sentiment: “Generally, the DAX continues to look good, and as we described the price action last week –“bullishly quiet”. That is to say, after the massive gap-n-run following the first round of the French elections the index is consolidating those gains; no real attempt to push it lower has been made. The conclusion drawn from this is it will make another run higher, sooner rather than later.”

The DAX is making good on the recent consolidation. In today’s trade, it is pushing above the first minor line of resistance coming in by way of a top-side trend-line running over swing-highs since August. We are quickly approaching the February top-side trend-line, and will soon find out how the market wants to respond to this potential line of resistance. Trend-lines running over the top of price in an uptrend are only viewed as having minor influence, but have been known to put lids on advances even if for only a short-while.

For a longer-term view on the DAX, or another market of interest, see our quarterly forecast.

From a tactical standpoint, we have zero interest from the short-side, but chasing here from the long-side doesn’t present the most appealing opportunity (especially since the market is trading very near potential resistance). In our view, there is better risk/reward attached to entries on a pullback/consolidation like the one which recently took shape.

On a pullback, support could come in by way of the recently crossed August trend-line, but we will look for the most recent swing-high of 12486 as a stronger point of support. Below the old high, the December trend-line could come into play, which arrives just above the biggest levels of support in the vicinity of 12414/375. It would require a break below that zone to turn the picture neutral to bearish – a bridge we’ll cross if necessary.

Heads up: Traders will want to tread cautiously as the French run-off election between Macron and Le Pen approaches this Sunday, and while expectations aren’t for the same type of volatility we saw as a result of the first round of the elections, always be prepared for the unexpected.