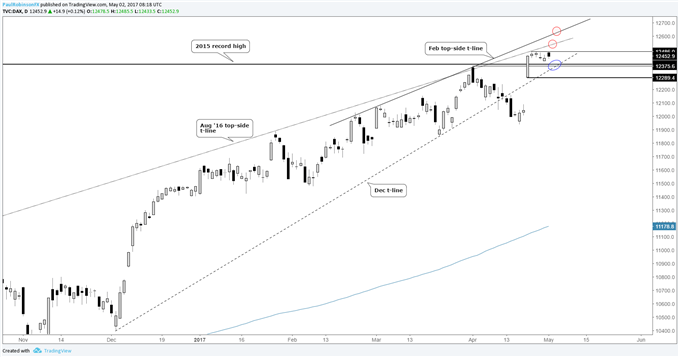 For a longer-term view on the DAX, see our quarterly forecast.

…and, we’re back! After a holiday yesterday in major European financial centers, trading has resumed. The DAX opened the session higher near last week’s record high presumably on the back of stronger Asian and U.S. markets to start the week, but quickly dropped 50 points or so to fill the gap and then some. It’s just a quick intra-day move, so let’s dial back to the bigger picture…

Generally, the DAX continues to look good, and as we described the price action last week – “bullishly quiet”. That is to say, after the massive gap-n-run following the first round of the French elections the index is consolidating those gains; no real attempt to push it lower has been made. The conclusion drawn from this is it will make another run higher, sooner rather than later.

But it’s not as if the DAX is without resistance on a breakout, even at record highs. We continue to look to a pair of top-side trend-lines as the next stopping points for the index, and while these rising t-lines aren’t viewed as major resistance they could still act as a short-term nuisance. The first in view runs higher off a peak extending back to August and the other connects across peaks from February-April.

Looking to support, the 4/28 low at 12414 marks the bottom of the recent consolidation period. Not far below are the old highs from 2015 and recently, falling in the 12391/75 area. In confluence with these important peaks is the December trend-line passing through.

We continue to maintain that as long as the DAX stays above last Monday’s gap-day low at 12289 that it remains constructive even it declines below the old highs; a drop into the gap would be construed as a fairly big short-term negative.