See the Q2 forecast for a longer-term view of where global equity markets look to be heading.

This morning, the DAX is trading higher by 2.6% following the outcome of the first round of the French presidential election. The two winners from yesterday’s election, Macron and Le Pen, are headed for a May 7 run-off election, with market optimism buoyed on the former winning. The French CAC 40 index is flying, up over 4% at the time of this writing. The Nikkei gained 1.37% in Asia, the FTSE is up 1.6% in London, while the S&P 500 futures are currently up 1% hours ahead of the open in New York.

The DAX wasn’t in the best health, technically speaking, heading into the weekend, but that wasn’t to matter with the French election on everyone’s minds. The German index is now only a stone’s throw away from the record high of 12391 set in 2015. Back on April 3 the DAX traded up to very near the old high before quickly reversing from 12375 and not bottoming until Thursday at 11941, so sellers are in the vicinity of record highs.

While recently the DAX broke the December trend-line and lower parallel extending higher from the February low, Thursday’s low came as yet another higher low in the broader trend higher. Barring a sharp reversal of today’s gap, it looks likely the DAX will soon notch out a new higher high on a breakout to new record levels. A move above 12391 opens the door up for further gains, but there is resistance even at new heights by way of the top-side trend-line extending higher from the August 2016 peak and upper parallel running over peaks in Feb, Mar, and this month’s high. These lines come in between approximately 12475 and 12555. In the short-term a pullback may be supported by the recaptured December trend-line close to 12275. 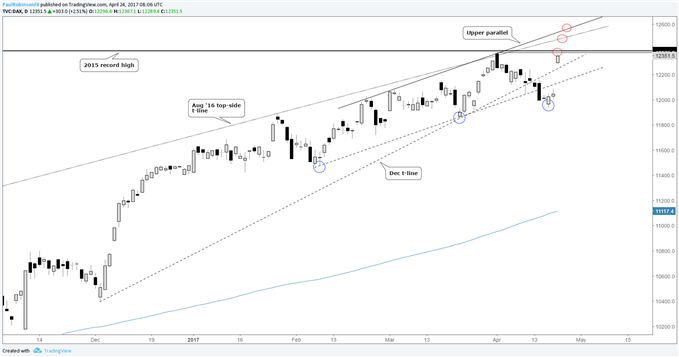 Come check out the commodities and equity indices webinar with Paul every Tuesday for up to date analysis on the DAX. See the Webinar Calendar details.