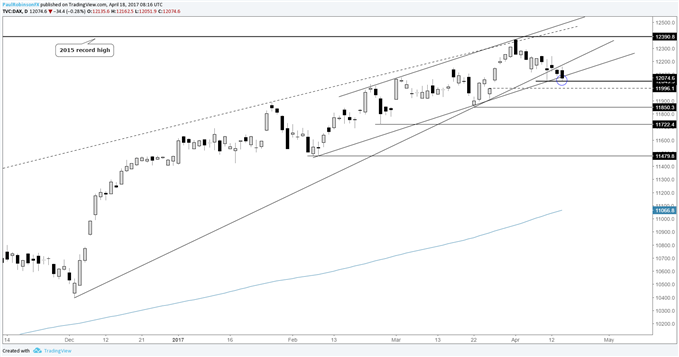 Can the DAX trade to new record highs in Q2? Check out the equity markets forecast for details.

Welcome back Europe. After an extended four-day weekend, the DAX opened in positive territory this morning but quickly sold off over 100 points in the first hour of trading.

In the weekly equity index forecast we discussed the December trend-line and lower parallel running up from February as potentially important inflection points. The DAX could close today below both lines of support as well has below the 4/11 low at 12050, which came on a day when gyrations at support suggested perhaps the decline from near record highs was over. In our book, the volatile exchange of buying and selling that day makes it a more important swing-low than usual. On a breakdown below all levels of nearby support we look for a fill of the 3/28 gap down at 11996, then the March low at 11850, with 11722 to come into play on an extended short-term move.

Overall, it doesn’t yet seem like this decline will become ultra-aggressive, and at some point in the not-too-distant future we could see the German index challenging record highs. But for now, our focus is from the short-side, looking for lower levels if the earlier-mentioned trend-lines and 4/11 low can’t hold.

Adding to the negative tone and developments to keep an eye on: Other major European markets, the CAC 40 and FTSE 100 are both down around 1% each. The CAC 40 is on the verge of breaking a steadfast trend-line coming up from the Feb low, while the FTSE is working on breaking below several bottoms in place since mid-March. Despite Monday’s relatively strong showing, U.S. markets are also in a position of vulnerability.