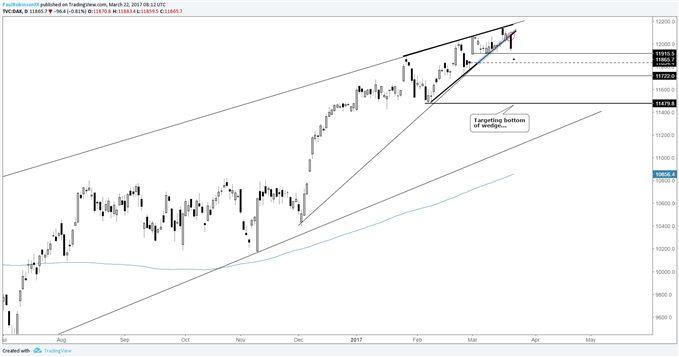 DAX Goes Kaput, but for Only a Minute, or Longer?

Yesterday, the DAX was hanging out on the bottom of the rising wedge we’ve been discussing lately, then the U.S. opened for business, and just like that the bottom of the wedge gave out. A strong afternoon drop in Frankfurt put the DAX solidly below the under-side of the pattern and December trend-line. Unsurprisingly, the pounding in Europe/US carried over into Asia trade, where the Nikkei took a 2%+ hit overnight, dropping below the under-side of an ascending wedge it had been building since the very beginning of the year.

'Risk-off' for only a minute, or longer?

The target is the bottom of the rising wedge formation, which doesn’t arrive until just under 11500. So, with that in mind, we expect a decent amount of selling to ensue in the foreseeable future. Rising wedges when triggered to the downside, in a market which has been rising for an extended period of time, tend to lead to aggressive sell-offs. Market participants are caught leaning the wrong way as the market suddenly breaks against a period of accumulation, as evidenced by the sequence of higher highs and higher lows carved out throughout the construction of the rising wedge. And given that equity markets by nature are long-biased they tend drop much faster than they do rise.

Long story short – we’re looking for an extended decline to unfold. As we warned in the weekly forecast: The DAX won’t make a big move by itself.