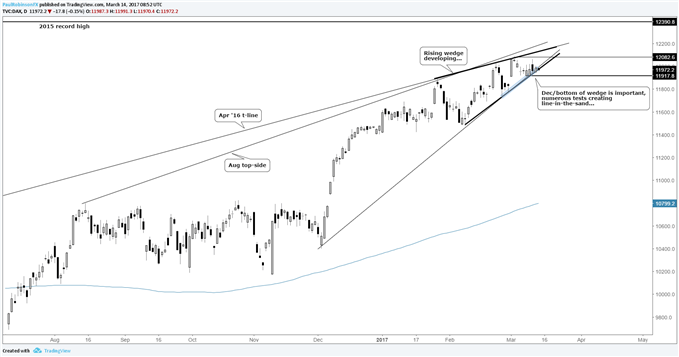 Last week, we were discussing the developing rising wedge in the DAX between the December trend-line and top-side trend-line extending higher from the August 2016 peak. For purposes of symmetry it would be ideal to see one more push higher before either taking out the top or bottom-side of the wedge.

The market is teetering right now. It has spent several days attempting to rally, but has failed to garner any momentum yet. It ‘feels’ as though support wants to give-way soon, but we have no interest in selling support in anticipation; instead we would rather wait for the break first before flipping our neutral to bullish bias upside down. If anything, this is the spot for would-be buyers to take interest given that the multiple tests of trend support have effectively created a ‘line-in-the-sand’. Continue to hold and a base of substance may be forming for another push higher. While a sustained break below the trend-line and 3/9 swing low at 11918 would put us on notice that a breakdown is likely taking shape, and selling could quickly pick up.

For now, as long as support holds we will continue to give the benefit of the doubt to the overall trend. Support is to be trusted until broken. On a push higher we will look to the early-month high of 12082 as the next level of resistance, followed by the top of the wedge (Aug ’16 t-line), April ’16 t-line, and on clearance above those two lines the market has nothing substantial until the record high of 12391. On a close below the trend-line and 11918 low we’ll be quick to flip the script and start looking lower, potentially much lower since the break could catch a substantially large crowd of longs leaning the wrong way.