Following Wednesday’s surge, yesterday was a relatively nothing day for the DAX with its paltry range of about 40 points. The German index found itself the past two days pressed up against several levels/lines of resistance we’ve been eyeing.

From Wednesday’s piece, “In the immediate future, the 2/22 high of 12031, April ’16 trend-line, 12079 (level from 2015), and then just a shade higher the August ’16 trend-line are our biggest concerns. All of these technical events lie within closely proximity to one another.”

We’re seeing some early selling on a gap-down open after the U.S. sagged during its afternoon session yesterday and weakness in sentiment continuing into Asia (Nikkei off by 49 bps).

Even with moderate selling in the near-term, the trend will remain point higher as long as the DAX can maintain the December trend-line (which gained further importance over the course of three days of testing it, 2/24-2/28), and not decline below the most recent swing low of 11722 created on 2/24. As long as support holds, the trend holds and downside momentum will be contained.

With further upside pressure and a break above the trio of resistance levels, the DAX will have room to run towards another top-side trend-line running up off the 1/3 swing high, then to the 2015 record high of 12391, which depending on timing may coincide with the Jan trend-line.

If the DAX continues to bobble around, though, between the pair of 2016 top-side trend-lines and the December trend-line, then the rising wedge scenario we briefly touched on the other day could come into focus. The outcome of such a formation could resolve itself into a strong squeeze higher or result in a sell-off; that’s the nature of the pattern, it often portends a big move, but doesn’t necessarily provide signaling as to the direction until it breaks (although rising wedges tend to be bearish). More on that later…

All-in-all, the tone for global equities remains bullish, and so it is expected to be the case for the DAX until we see price action indicate otherwise. 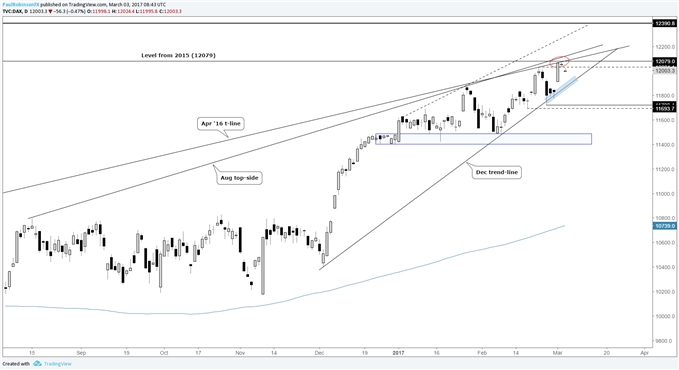