DAX Springing to Life After Thorough Test of Support

On Monday, we looked at the test the DAX was putting the December trend-line through; so far, so good as it not only held for three trading sessions, but this morning we’re getting a strong lift of over 1%. An ‘uplifting’ speech by President Trump to congress is helping put markets in a good mood to start the day (S&P 500 futures are trading higher by about 50 bps).

Moving on to the techs, this is what we had to say to start the week: “if the trend-line can hold, then with a little work the DAX could find itself funneling back higher towards the top-side trend-lines it turned lower from and 12079 level.”

The word “funneling” was used because that is exactly what price action is beginning to do for much of the first two months of the year. The top-side trend-lines running back to a pair of peaks in 2016 are converging with the December trend-line. A matured rising wedge could end with a big rip, or warn of a top; we’ll worry about that more at a later time.

In the immediate future, the 2/22 high of 12031, April ’16 trend-line, 12079 (level from 2015), and then just a shade higher the August ’16 trend-line are our biggest concern. All of these technical events lie within closely proximity to one another. It’s certainly a gauntlet of resistance for the market to overcome, which is why it may initially find difficulty peeling through even if an assault on the 2015 record highs lies around the corner.

Key support remains the December trendline, which was further reinforced with importance on this last decline. We’ll continue to run with that trend-line and a constructive bias for as long as it holds and no other bearish price action rears its ugly head. 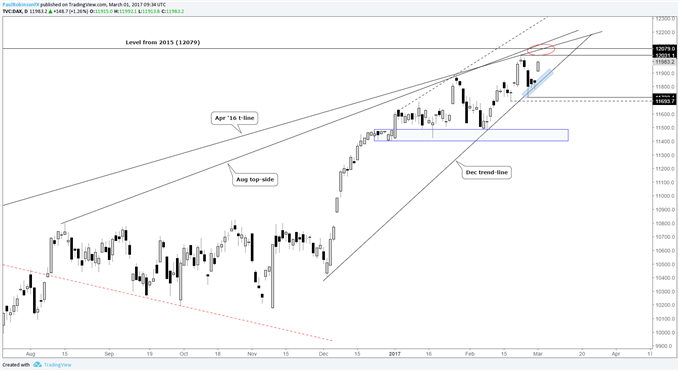