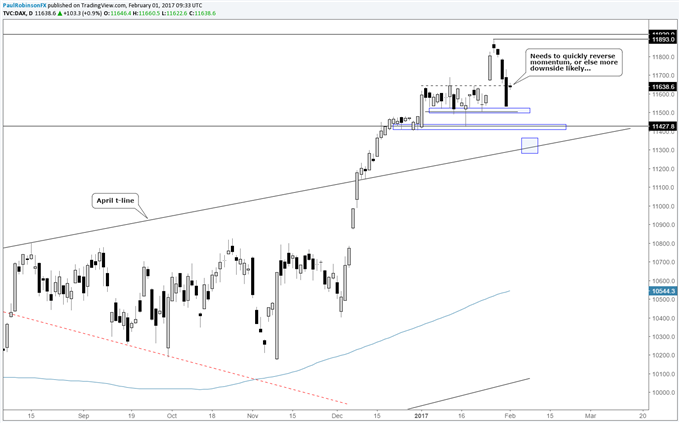 On Thursday, the last time we discussed the DAX it had just broken free from a multi-week range and was challenging key levels forged during the 2015 decline off the record high. It was also that day which marked the high of the advance out of the basing formation in place since the second trading day of the month.

It’s been a sharp turnaround – easy come, easy go – with yesterday accounting for a large share of the recent losses. This puts the DAX in an interesting spot. The breakout from the high-level base failed, and if it doesn’t turn the downward momentum around quickly, more is likely to come. A break below 11500 would put 11408/25 into play, and below there the top-side trend-line running back to April, currently clocking in just above 11300.

The decline could turn out to be a short-lived pullback, but the market needs to turn, and do-so quickly. Today's gap higher may be a start, but too soon to tell. The decline from near 11900 was fairly violent, and suggests more downward momentum could be on its way. If 11500 can hold up, then the DAX could find itself setting up for higher prices; a scenario in which we’ll need to see constructive price action before becoming confident about.

Key event risk today: The FOMC will announce its decision today on rates and release a policy statement at 19:00; there are no moves expected at today’s meeting, so focus will be as it often is – on the language in the policy statement. European markets will be closed during the time of the meeting, but any major moves which happen in U.S. markets are likely to spill over into tomorrow morning’s trade. The BoE is on deck Thursday at 12:00 GMT. See all upcoming events via the Economic Calendar.

See our Webinar Calendar for a schedule of upcoming live events with DailyFX analysts.