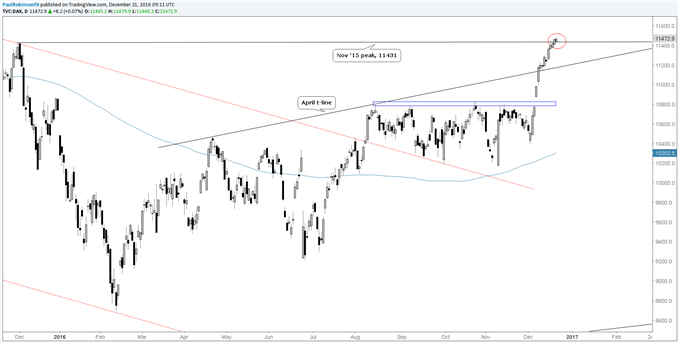 The DAX continues to push on, the November high from 2015 we discussed recently on approach was met with little to no resistance. We thought maybe there might be a reaction, but so far nothing. It’s been a bull; year-end forces are helping keep stocks moving higher in the absence of a reason to sell. If this were another time of year, the market would likely behave differently. But it’s not. Thin holiday trading conditions until the calendar flips will be in effect.

From here the DAX is likely to end the year at its best levels of the year or pretty close. Any dip which unfolds is likely to be picked up barring a major unforeseen catalyst which would upset the market. This doesn’t mean if holding a position one can get complacent about managing risk; always expect the unexpected. Always.

Getting back to the chart, the DAX beyond the November peak at 11431 doesn’t have anything for over 200 points higher, where it will start running into peaks created during the 2015 decline. In terms of support right now, the 11431 area, now that it’s been broken, may act as minor support in the near-term. Be careful chasing here. Yes, the market looks poised to maintain its bid, but risk/reward has become negatively skewed towards anyone looking to establish a new position beyond a very short-term hold (in either direction).

Join Paul on Thursday at 10 GMT for the “Becoming a Better Trader” webinar, where he will discuss a checklist he uses before entering any trade.