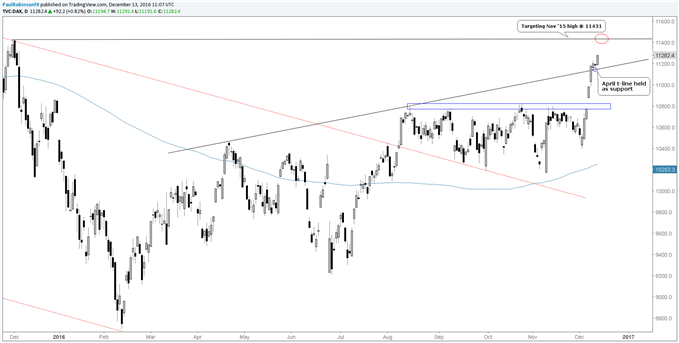 When we last took a look at the DAX on Friday, the day prior it had crossed over the top-side trend-line running back to April, turning a minor line of resistance into a line of support. We also made note then that a pullback and/or consolidation period would help reload the cannon. It didn’t take long to recoil as we are seeing today. During the Friday/Monday sessions the DAX consolidated briefly, with yesterday’s low coming right at a retest of the breached April trend-line. It was only viewed as minor support, but given how strong the market has been since breaking out it was all that was needed so far to sustain last week’s rocket higher.

With nothing in the way until our target at the late November 2015 peak of 11431, the path of least resistance is likely up between now and then. At the time of this writing, that is only about 150 points from here, so we’re not asking for much.

As the trend looks poised to continue forging on, traders will likely be best served looking to short-term dips as opportunities to establish long positions until price action gives indication that current momentum has run out of steam. That may come around the Nov ’15 peak, but with ‘nothing to the left’ on the charts until then we don’t have any visible resistance to hang our hats on as sellers.

A potential wrinkle in our bullish bias would be if by day’s end we see the DAX reverse and close towards unchanged or lower on the session. This would be a sign of short-term exhaustion and a warning of a short-term retracement at the least.

*Join me on Wednesday for the “London FX & CFD Trading” session at 10 GMT time, where we'll look at charts of interest ahead of the Fed. For a full schedule of upcoming live events, see the webinar calendar.