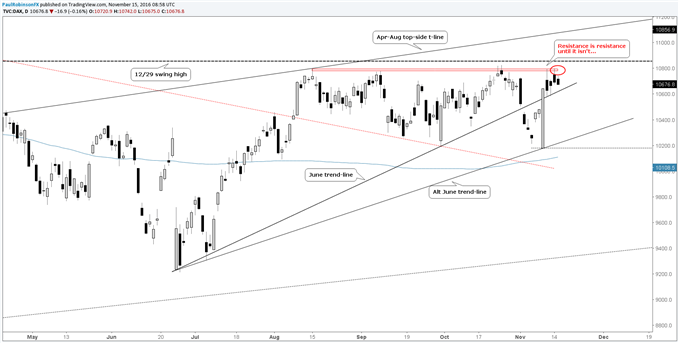 Check out our regularly scheduled daily webinars for full analyst insights across an array of markets.

The last time we looked at the DAX was on Wednesday following the surprise victory by the US presidential candidate, Donald Trump. Markets were initially tailspinning at one point, with the S&P 500 futures trading down lock limit in the very early morning hours following the Republican’s victory. Markets recovered in ferocious fashion, though. The DAX traded a shade under the 9/30 low and rallied from 10175 to finish Wednesday at 10646. U.S. markets rallied huge, too. Since then the German index has pushed back up against triple peaks surrounding the 10800 level, but is struggling to overcome.

First things first – resistance is resistance until it isn’t. It’s a seller’s market at the moment. But that could change soon if the market doesn’t start hitting bids. A market which consolidates under a major area of resistance for an extended period often times, at the least, attempts to make a break for it. The DAX isn’t there yet.

On a downturn, we will keep an eye on the recaptured June trend-line as support, currently around 10630. Thursday and Friday daily lows at 10584/76 will also come into play. A drop below and nothing substantial until the trend-line rising up from the June low beneath the Wednesday gap-down day low, which isn’t for a few hundred points.

If the DAX can hang out and build up steam via the consolidation scenario, we will look to the swing high created on 12/29 at 10860 as the next short-term level to overcome if the DAX can break above the triple peaks . At that juncture, we will have our eyes set on the top-side trend-line with connecting peaks in April and August (~11050/100).

Check out our Forecasts and Trading Guides