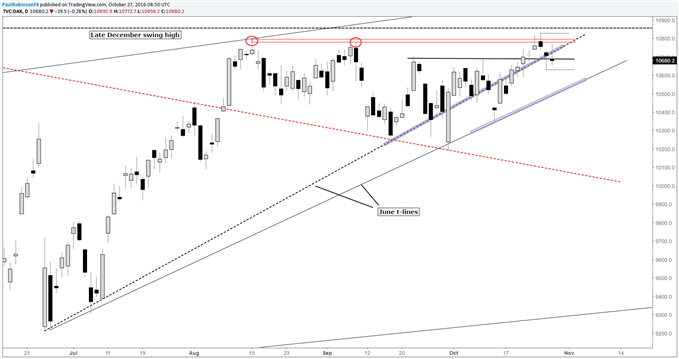 Yesterday, we discussed how the failure by the DAX to push through the August/September highs exposes downside risk. Yesterday’s session started out weak, with sellers pushing the index below the June ‘cross-through’ trend-line and 9/22, 10/11 peaks around the 10700 level. A few hours into the session the DAX reversed to close back above noted support levels, putting in a daily reversal candle.

Early this morning, we saw initial weakness but the market quickly erased those losses, sending the DAX back up towards resistance surrounding the 10800 level, where sellers were once again found. It’s turning out to be a volatile session so far. When the market is stuck between support and resistance in close proximity this kind of stuff happens.

Again, market conditions are making it difficult to reach concrete conclusions for trade set-ups with good risk/reward profiles given inflection points are so close at hand. Many times, no trade is the best trade…now is one of those times.

What will change this view?

A solid close below 10700 and then the Wednesday low at 10632 will open up a path towards the rising trend-line off the June lows (~10500/25). On the top-side, the market needs to push convincingly above recent peaks along with those late summer highs, ultimately overcoming 10827. Not far away is a swing high from December at 10856, but not viewed as resistance of significance at this time.

In any event, don’t expect a ton of momentum to kick in, but a path of least resistance for a day or two could present itself if either of the scenarios described comes to fruition.