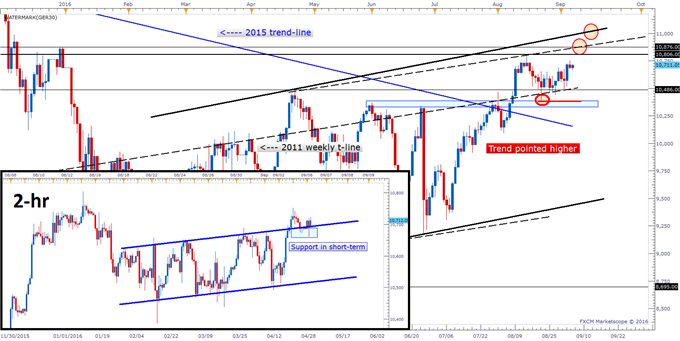 When we last examined the DAX on Friday prior to the US jobs report the index was trading above the lower parallel of a channel developing on the 2-hr chart. Following the worse-than-expected data, Fed rate hike expectations dipped and US stock index futures ripped, as did European equity markets. The DAX eventually ended up clearing the top-side parallel with the help of the weak, but not too weak job report.

The German index saw a small dip yesterday after initially pushing higher, putting price action right around the upper parallel. What was resistance just a couple of days ago is now viewed as support. As long as the DAX can hang out above the hurdle, it will continue to be viewed as such. Even if it drops back below, it won’t be major cause for concern. A drop below the lower parallel and 10,491 will, though.

The daily trend remains pointed higher in the intermediate-term, with the post-Brexit low acting as a significant turning point this year. In the shorter run, looking out over the past month, the price action still remains choppy, but overall constructive as long as the 8/22 low at 10386 can hold during this sideways shuffle.

On the upside, with further strength the 8/15 high at 10806 should be hurdled and a move to the December ’15 pivot along with the top-side parallels in place for much of the year (10876/11000) will become the risk. There are two variations of the 7-month channel drawn so as take into consideration a couple of different possible angles. The more conservative parallel alligns up close to 10900, while the other could run around or a little above 11000.