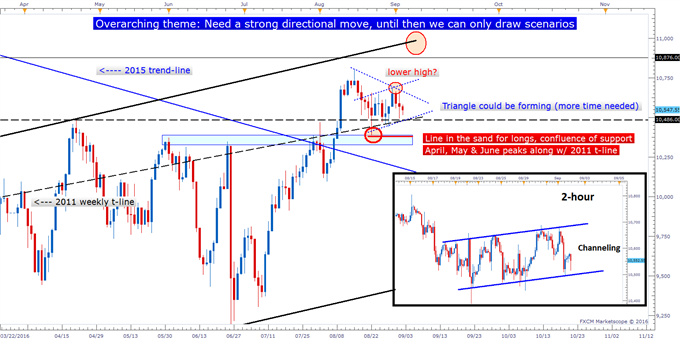 On Wednesday, we were taking note of the DAX turning higher from a key area of support, but had this to say about what posed risk to this view: “The biggest risk in the very near-term appears not to be sellers stepping in and bullying the market lower, but rather a lack of good movement as we work our way through the remainder of the dog days of summer.”

Well, fortunately, the dog days of summer are nearly over as the calendar has flipped to September. But, the price action in the DAX still looks ‘wish-washy’ as it attempts to forge out a low above 10500.

The overall trend is higher since bottoming post-Brexit, with the current sideways price action potentially acting as a period of consolidation before launching higher.

However, it will need to do so soon or else the lack of sponsorship from a steadfast level of support could be a tell that the recent malaise in price behavior could be a sign the DAX wants to roll over.

Taking a closer gander at the intra-day time-frames (2-hr in this case) we can see a well-defined channel taking shape since the third week of August.

The bullish take-away is the DAX rejecting the lower parallel and eventually turning up and clearing the recent peak at 10689 and the upper parallel. The bearish take-away from that development is that the market is working on a lower high scenario from the 8/15 peak, and could result in a breakdown below not only the lower end of the channel, but 10386 as well. A break below that threshold would mark a lower low, and more importantly act as a breach of the former resistance turned support the DAX has recently been using as a trough.

The alternative should the channel turn into more whip-saw trading, is the development of a triangle on the daily with a few more ‘ups and downs’.

This is the problem with this type of market right now, a few different things could be going on, and until we see a strong push in one direction or another we can only draw up scenarios and not concrete conclusions.

Today, at 12:30 GMT the US jobs report will be published and is a potential source of volatility. Expectations are for a print of 180k new jobs added in August, with a slight downtick in the unemployment rate from 4.9% to 4.8%. The market will also be watching for signs of wage inflation through the average hourly earnings figure, which was 2.6% YoY in July. Given the upcoming FOMC meeting later this month, data which is well above or below expectations could have an outsized impact on the short-term direction of global equity markets later today.