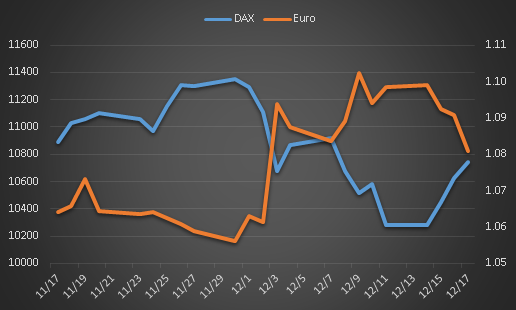 DAX 30: The Euro, the Force Is Strong With This One

Yesterday, the DAX 30 continued to propel higher following the successful hold of key support below the 10,200 mark. It wasn’t until selling pressure in US equities spilled over into European markets did the DAX back off its session highs. The stiff selling pressure seen in the US was only able to take a small bite out of earlier day gains in the DAX. Here is why…

The Euro also took a hit, making a 50 pip move lower during the last hour of the DAX cash session. The funding status of the Euro has a strong impact on European equity prices. The 5 and 21-day correlation between the DAX and Euro currently clocks in at a whopping -94%+ each. This is as about as strong of a relationship as we will see, and it will likely ease a bit moving forward, but will continue to be a key theme.

In the very short-term we have confluence between key support around the 10800 level in the Euro and the DAX retesting trend-line resistance running down off the April peak. If the Euro can recoup some of the week’s losses from support, the line of resistance in the DAX is likely to stand for now.

Looking at the charts from the perspective of pure pattern recognition we can see the DAX is still in the process of potentially carving out the ‘head-and-shoulders’ pattern I brought to attention last week, however; end of the year momentum in the dollar may further weigh on the Euro and ultimately provide a tailwind for the DAX to march higher. 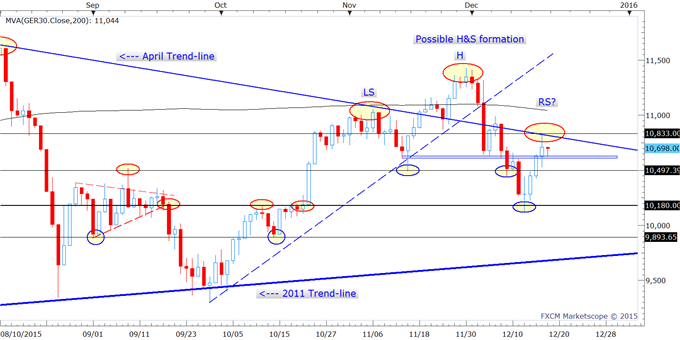 For now, we will stick to resistance acting as a backstop for our short-term negative bias keeping the Euro in mind, but should any decline which may unfold do so in a constructive manner we may be forced to abandon this bias in exchange for a more favorable outlook. If this is the case and the DAX rallies we won’t have Santa Claus to thank, but rather the Euro.