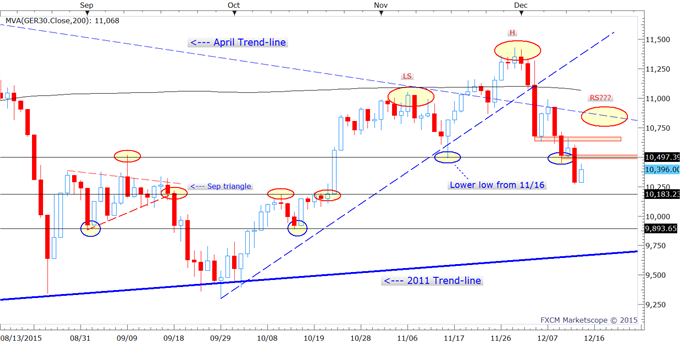 Last week, we outlined the possibility the DAX 30 was in the process of etching out a ‘head-and-shoulders’ formation. At the time it was expected the index would be unable to climb much above the 11k mark before rolling over and carving out a ‘right shoulder’. Rising to those levels is now looking rather ambitious, increasing the likelihood that if an H&S formation is to develop it will need to do so at lesser levels.

But we don’t need a ‘silly sounding’ chart formation to be bearish do we? No, we do not. The trend since the end of November has been decisively down, and with the DAX swiftly breaking through support around 10,500 (marking a lower low from 11/16), we have a solid reference point on a counter-trend rally from which to potentially position in favor of lower prices. If momentum on a bounce into the 10,500 area fails to turn lower then we will look to the mid-10,600s and then the April to present trend-line above 10,800.

On further deterioration the market may find buyers around 10,180 where the apex of a triangle back in September formed, and later gave pause to the DAX in October prior to it exploding higher. Continued selling pressure through 10,180 will expose minor support around 9,925 and major support at the long-term trend-line under 9,700.

Tomorrow kicks off the two-day FOMC meeting, which is easily one of the most highly anticipated events of the year. The December 3rd ECB meeting was another; needless to say, but volatility was off-the-charts. The announcement and press conference are scheduled for after the close of European cash markets on Wednesday, but futures will be responding to the headlines and US markets. The Fed is expected to raise rates for the first time since the last tightening cycle ended in 2006, but there is still ample amounts of uncertainty as to how the Fed will proceed, and so we are left with plenty of room for Janet and Co. to catch market participants on their heels.

With the FOMC in mind, we will wrangle in risk in any market we trade until the dust settles.