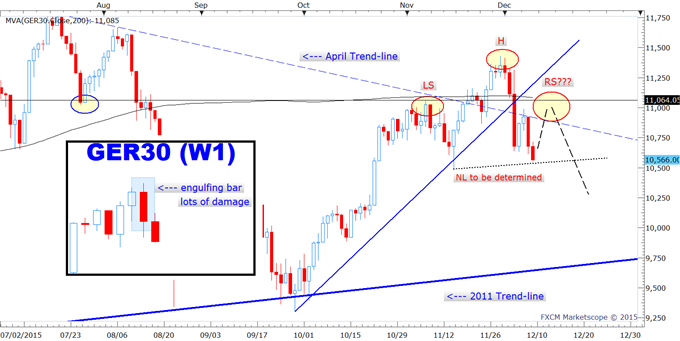 DAX 30 - A Blueprint for the Bears

Last week, ECB-driven disappointment saw to it that the DAX 30, in a single day, was to take out a significant portion of bullish price action carved out during the latter part of November. In the process of doing so it formed a bearish engulfing bar on the weekly time-frame. Sellers pushed the index squarely back below the downward trend-line extending lower from the all-time highs created in April. Additionally, a trend-line running up from the late September low turned out to be an insignificant reference of slope support as last Thursday's close printed several hundred points below.

Can the DAX recover from the technical damage experienced? That is the question. German stocks will need to find some stability soon if it they are to regain their footing, but in the process of doing so the subsequent price movement may lend a hand towards creating the 'right shoulder' of a fairly broad-sized 'head-and-shoulders' pattern dating back to late October.

If the H&S formation is to come to fruition it is unlikely the DAX will be capable of recapturing much ground above the 11,000 mark in the near-term, which has not only proven to be a psychological barrier, but also roughly coincides with the always-watched 200-day moving average and potential 'left shoulder'.

More time will need to pass before we can draw further conclusions, but the blue print at this time is being drawn up for lower prices down the road, if not sooner. In the interim, we expect price action to remain choppy as the market digests (non)actions taken by the ECB and looks forward to the critical FOMC meeting coming up next week on the 15 and 16th.