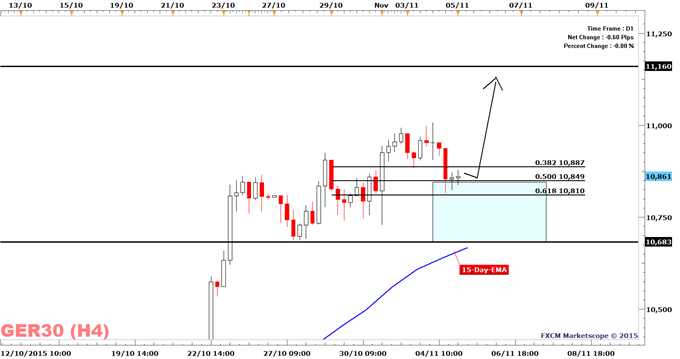 Yesterday, the German DAX 30 took a hit of almost 1% and was a bit of an outsider amongst European bourses, which closed higher with the exception of the Italian stock market. The reason for the DAX closing lower can be spelt out in one word: Volkswagen (VW).

Volkswagen’s share price fell by 9.5% on the day that Volkswagen disclosed an internal probe on up to 800,000 cars that were sold, mainly in Europe, along with understating the fuel consumption and level of carbon dioxide emissions. This latest figure of 800k cars is in addition to the roughly 11m cars that were previously reported to be having problems.

Adding a new dimension to the scandal is that out of the 800k new cars having problems, two of those models are gasoline. Adding gasoline cars to the mix opens up a can of worms because up until now the worse than reported emissions of carbon dioxide were diesel cars.

I would not be surprised if the DAX 30 remains soft for a day or two as traders unload shares in VW. The share price itself slid below the support level.

Following yesterday’s better than expected ISM Service reading, bulls got more reasons to be bullish, ISM Services printed 59.1 vs. the 56.5 expected and U.S. ADP employment changed, increasing by 182K vs. the 180K expected.

Today, Jobless claims are on tap and the Bloomberg News consensus poll suggests that the outcome will be 260K from 262K, in my view a market movement that should be limited unless we get a major deviation vs. the expected outcome.

Learn more about trading, join a London Seminar | To be added to Alejandro’s e-mail distribution list, please fill out this form