Last week, I noted that the chart of GBP/USD was looking increasingly bullish with the development of a bull-flag at support. Yesterday’s pop broke price out of the pattern and above the 13919 resistance level from earlier in the month. Things are looking up for cable, but the path is anything but certain.

Cable can be a tricky one to trade, often taking unconventional paths to where it ultimately arrives. The breakout of the bull-flag is clear cut, done in an explosive fashion. This should set up for higher levels in the near-term. But, don’t be surprised if there is a fair amount of backing-and-filling before that happens.

It would be fair either way, whether we see a shallow or deep retracement, for GBP/USD to back off here given the difficulty it had during the first half of March getting through 14000. A retracement may first find support at the 13919 swing-high it just crossed.

A hold at that resistance now turned support would be one of the cleaner possible scenarios. Holding between support and the 14000 resistance may create a horizontal pattern to work with. Also a clean path. But it is entirely possible cable retracements much or all of the up-move it just made before running higher again.

So what is a trader to do? If long from good prices, then sitting tight for now appears to be a prudent move. For would-be longs, waiting for a smallish pullback/consolidation may offer the best risk/reward. Getting above 14000 and holding is the next key.

In any event, the high at 14241 looks like the next top-side objective. To bring into question the broadly bullish uptrend since March of last year, GBP/USD will need to break the nearly one-year-long trend-line it just rallied off of and trade below the 13668 threshold. 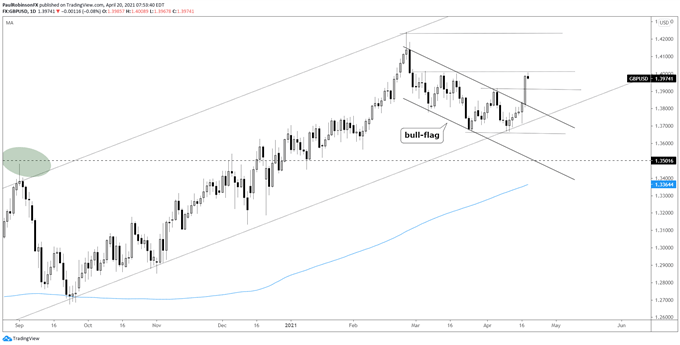