- The British Pound has continued to sell-off after last week’s BoE rate hike. GBP/USD has now traded through the 1.3000 psychological level after catching a bounce there in July, and the prospect of further losses remains as a dovish BoE is coupled with a brutally unclear near-term future as we approach EU-UK Brexit negotiations.

- Retail traders continue to try to call a bottom on GBP/USD, which means that we probably haven’t seen that print yet. The bearish approach is complicated by oversold RSI readings on the chart, but a series of nearby resistance levels remain and can keep the door open for bearish strategies in the pair.

It’s been a busy past few trading days for the British Pound. This time last week, GBP/USD was re-claiming support at the 1.3117 Fibonacci level; and despite the fact that resistance continued to hold from a bearish trend-line, a Bank of England rate decision looming on the calendar for the day after kept open the possibility of a topside push in the pair. And it was just a couple of weeks before that when rumors began to float that the Bank of England may end up being more-hawkish than anticipated, helping the pair to recover after a failed attempt to take-out the 1.3000 psychological level.

But last week’s BoE rate decision was more dovish than perhaps even the most bearish BoE pessimists might have imagined, and the currency has been in a hard-sell posture ever since.

A Diminishing Case for Bullish Prospects

GBP price action has been very bearish since mid-April. This is when falling rates of inflation brought to question the possibility of a hawkish push and, more to the point, future rate hikes out of the BoE. This theme of a dovish Bank of England was combined with a brutal amount of uncertainty on the Brexit-front as matters seemingly grew more opaque through June and into July. That uncertainty around Brexit remains, as PM Theresa May’s cabinet has seen a number of high-profile resignations and, at this stage, there is little indication as to what we can expect from EU-UK negotiations around Brexit. With very legitimate fears of a ‘Hard Brexit’ outcome, there are even fewer reasons for optimism, and this can continue to act like a wet blanket on GBP price action in the coming months.

The pair is unlikely to find much help from the Bank of England. At that rate hike last week, the BoE remained fairly pessimistic around future economic conditions, forecasting one potential rate hike ahead of 2020.

So, at this point, it appears as though the most bullish factor currently going for the British Pound and GBP/USD is just how entrenched this down-trend has become, bringing on the potential for a short-squeeze as markets re-familiarize with GBP/USD trading below the 1.3000 psychological level.

We’ve been following dynamics in IG Client sentiment around GBP/USD of recent. In July, we had used a shift within the indicator to open the door for a counter-trend position up to the 1.3200 handle, which happened to be the area that helped to mark the three week high in the pair. But as prices broke-lower, retail traders got back into the bottom-calling mode and net-long retail sentiment has continued to grow in the pair ever since.

Given the contrarian nature of retail sentiment, this keeps the door open for further downside, even despite the oversold nature of the current move.

Retail Sentiment Remains Heavily Net Long in GBP/USD at 2.86-to-1 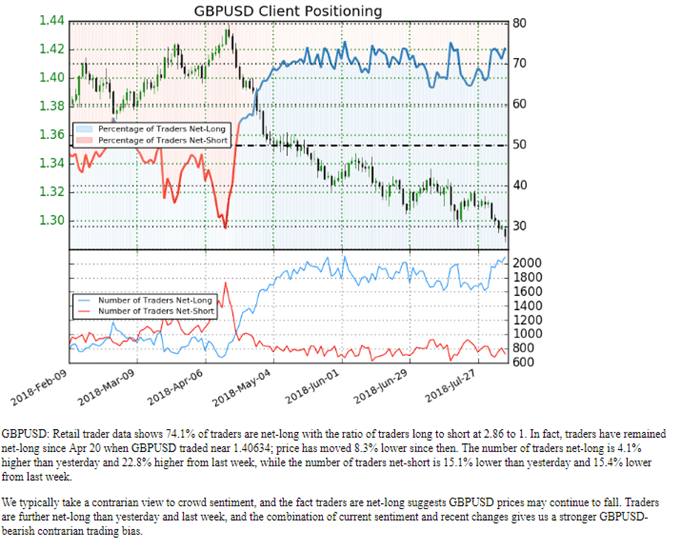 The primary challenge with GBP/USD at the moment is finding an adequate entry point. The trend remains fairly strong, and there’s valid reason to expect that trend to continue. But this has been so pronounced that any retracements so far this week have been quickly sold before resistance could come into play.

This type of environment is generally where traders, particularly newer traders, will abandon their discipline in order to buy or sell in hopes that volatility continues to show. This usually works out to those traders’ detriment and long-term, it’s not a feasible way of managing a trading account. More proactive, however, could be to wait for resistance to show at which point stops can be set to a palatable amount, allowing the trader to look for the trend to continue without taking on an extreme amount of risk for doing so.

On the below chart, we’re looking at three potential resistance levels inside of the 1.3117 Fibonacci level, each of which can keep the door open for downside continuation in GBP/USD. If we have a topside break above 1.3117, that would mean we also have a violation of the bearish trend-line, which would likely mean that something has shifted in either the backdrops of Brexit, the BoE, or the US Dollar – and at that point the bearish stance should be re-investigated.