GBP/USD: Cable’s Q2 Down-Trend in Focus Ahead of UK CPI

- The British Pound’s continued down-trend comes into focus this week as a series of pertinent data prints are released out of the UK. The big question is whether this week’s data improves odds of a rate hike at the Bank of England’s next rate decision in August. This is a ‘Super Thursday’ rate decision set for Thursday August the 2nd, and markets have been warming up to the prospect of a rate hike at that decision over the past couple of weeks.

- Despite those growing expectations for a hike in August, the British Pound remains mired in the Q2 down-trend that reversed more than half of the prior year’s bullish trend. Bears have been unable to make much ground below the Fibonacci support level at 1.3117, at least so far.

The Q2 Reversal in the British Pound

The British Pound has hit a series of stumbles over the past three months. As we came into April, the currency was flying high on the prospect of near-term rate hikes out of the Bank of England, largely in response to the continued strength that had shown with inflation throughout last year. The bullish trend in the currency can be drawn back to March of 2017, when GBP/USD was trading just a bit over 1.2100. Through the remainder of 2017, that bullish trend continued to run, and by the time we got into April of 2018, prices had started to test above the 1.4300 handle.

But that theme of GBP/USD strength disintegrated throughout Q2, led by a combination of both US Dollar strength and weakness in the British Pound. The big factor of differentiation for GBP came-in around the release of March inflation numbers in mid-April. When inflation disappointed ahead of the May ‘Super Thursday’ rate decision at the Bank of England, odds for near-term rate hikes tanked-lower; and the disappointing GDP report released a week later further contributed to the dive.

Once Q2 had come to a close, GBP/USD had erased more than 50% of the up-trend that took more than a year to build. 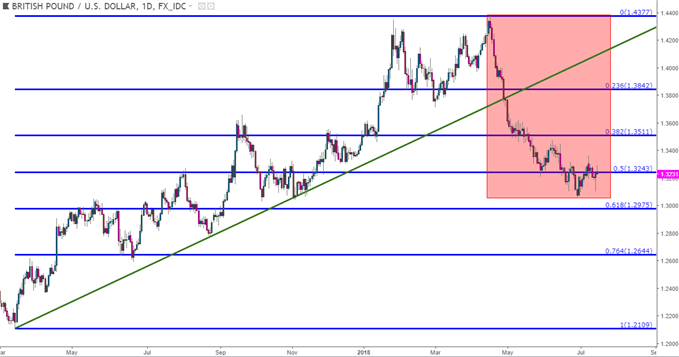 As we opened Q3, GBP price action began to take on a brighter tone. At the most recent BoE rate decision in June, there were three dissenting votes cast in favor of an immediate rate hike: Considering the bank’s reticence to make any actual moves at non-Super Thursday rate decisions, this was noteworthy, and markets appeared to pay attention. But, we still have some overhanging risk from ongoing Brexit discussions, and with the EU-UK showdown now just three months away, there are quite a few questions that remain unanswered.

A bit of clarity began to show last week on that front as we opened last week, but we still may have a winding road ahead as we near Brexit negotiations between the UK and EU. What has started to grow in prominence are expectations for near-term rate hikes out of the Bank of England, with specific focus paid towards the next ‘Super Thursday’ rate decision set for August. Key for that decision will be near-term economic performance out of the UK, and this week is a big one on that front as we have employment numbers on the economic docket for tomorrow, followed by June CPI data set to be released on Wednesday and Retail Sales numbers due to be released on Thursday. 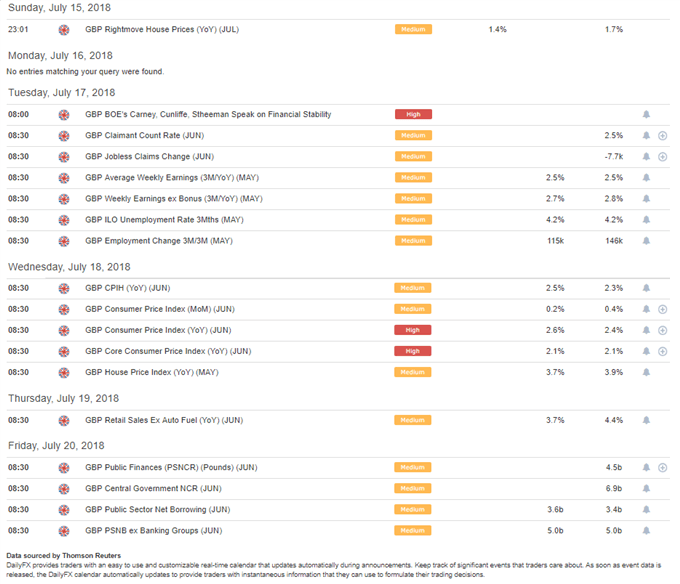 Inflation has been somewhat of an ongoing saga around the UK since the Brexit referendum, and this is reflected fairly well in the British Pound. After the ‘sharp repricing’ in the currency after the referendum, inflationary forces began to build until prices were growing at a strong 3% clip. This eventually brought upon a rate hike out of the BoE in November of last year, but even that was done in a somewhat dovish manner as the bank remained non-committal towards future rate moves.

Nonetheless, inflation has continued to soften thus far in 2018, and that’s helped GBP/USD to pullback from last year’s bullish up-trend. Inflation came-in at a one-year low in April of 2.4%, and that was echoed in May by another 2.4% print. So, while we do remain well-elevated above the BoE’s 2% target, it would appear that we’re in the midst of a rather unattractive trend.

The expectation for Wednesday’s print is 2.6%, which would be the first increase to inflation since November of last year. 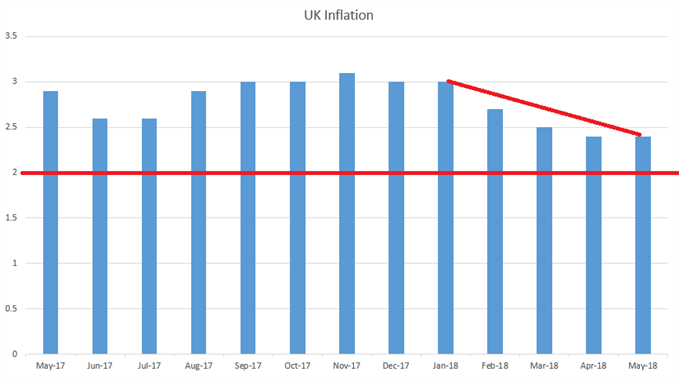 As we discussed last week, from a purely economic standpoint, there’s a very valid case for strength in GBP/USD as we trade into the second-half of the year. While inflation has been drawing-lower of recent, we remain well-above the BoE’s target, and seeing those initial shifts within the bank from last month’s three dissenting votes makes the prospect of near-term rate hikes seem a bit more likely.

The bigger question comes from UK politics as we get closer to Brexit negotiations. The Mark Carney-led Bank of England has displayed a sensitive posture to political risk in the past, so are we at a stage where the BoE might be so confident in a successful Brexit that they’ll hike rates as the UK walks towards negotiations with the EU? Or will the bank wait until the next Super Thursday rate decision in November to further monitor inflation trends along with the continuation of Brexit dynamics?

It was just last week that there were circulating thoughts that we may be headed for another round of elections in the UK with PM Theresa May potentially on the hot seat, and this may not be the most opportune environment for a conservative Central Bank to make a move that they’ve seemed loathe to do in the recent past.

That rate decision is now two-and-a-half weeks away, set for August 2nd, and fully expect markets to jostle odds for a hike ahead of time on the basis of how UK data comes out. On a shorter-term look, GBP/USD remains in a down-trend after yet another bounce from the Fibonacci level at 1.3117. Bears have had a difficult time making any ground below that Fibonacci level, and this further highlights just how oversold the pair had become during last quarter’s precipitous drop. 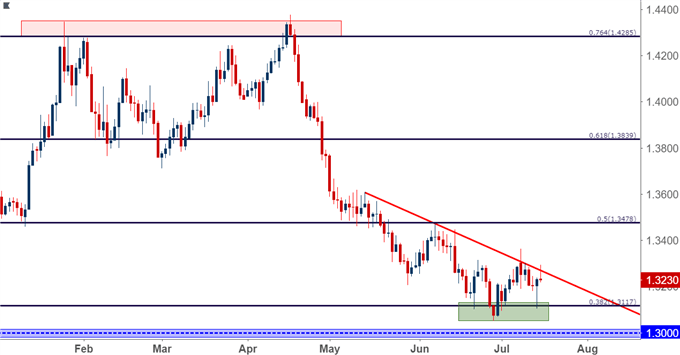 The inability of bears to make much ground below 1.3100 makes the short-side of the pair rather unattractive. The long side of GBP/USD, however, could start to become a more work-able theme should prices finally begin to substantiate a string of gains. A test-above the July swing-high of 1.3365 opens the door for a re-test of the zone that runs from 1.3447-1.3478. The price of 1.3500 was rather rigid support when prices were on the way down, so traders would likely want to look at break-even stops if keeping any of the position open after a re-test of 1.3500. Secondary targets could be sought towards the May swing highs, which run from the 1.3600-area up to 1.3666. 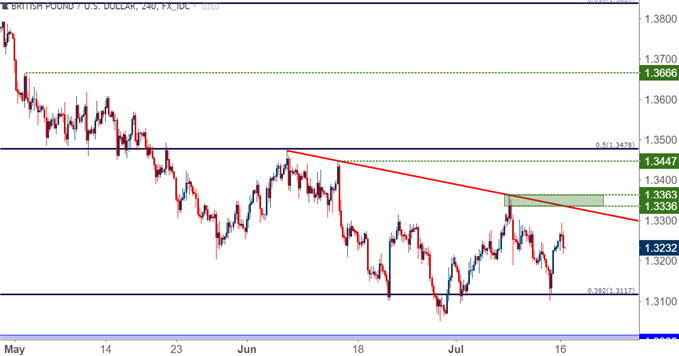