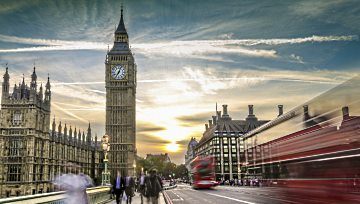 - It’s been a big week for the British Pound as the currency continued to show strength after last week’s gains. Prices have crafted a fresh two-month high, and we’re currently seeing some resistance post off of the 76.4% Fibonacci retracement of the Brexit move in the pair.

- The door for bullish continuation remains open, but current levels are of a concern as price action posed a brisk turn-around in this area in January. Below, we use the four-hour chart in the effort of identifying shorter-term levels of potential support in the pair.

It’s been a big week for the British Pound, as GBP has been one of the world’s strongest currencies over the past few days. Last week saw prices catch support around the 1.4000 psychological level, and this week saw that strength continue as prices moved up to fresh two-month highs. As we near the close of this week, resistance is showing at a familiar area, the 76.4% Fibonacci retracement of the ‘Brexit move’ in the pair. This is very near the January top and this level had helped to produce a lower-high just ahead of the February reversal in the pair. 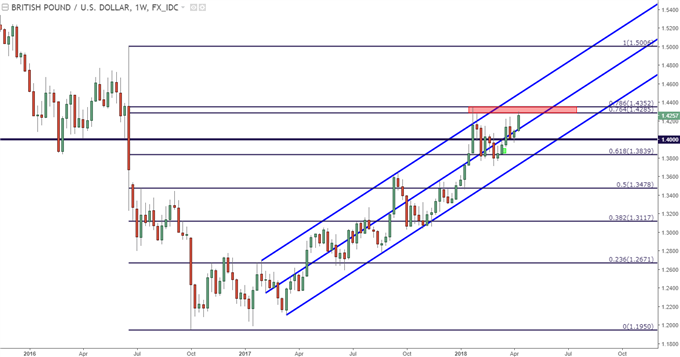 UK Inflation for March to be Released on Wednesday

Next week brings a key driver to the fray with the release of UK inflation numbers for the month of March, and stronger inflationary reads have very much been a push point for the long side of GBP/USD. As the pair came into 2017 dwindling near historical lows, a build of inflation throughout the year helped to provoke the topside move. As we came into 2018, inflation at three-percent kept the Bank of England in a spot where they couldn’t really get that dovish; and as we approach a May ‘Super Thursday’ rate decision, there’s a high probability of getting another rate hike out of the UK as the economic backdrop has continued to show strength.

This can keep the topside of the pair attractive and, eventually, lead to a breach of this resistance zone as we move deeper into the year. The challenge at this point would be one of entry, as we remain very near that zone of resistance with few nearby areas of support for stop placement. Prices have now moved higher for six consecutive days, and the prior swing-low is all the way below 1.3975, more than 275 pips away from current prices. This makes for an unattractive context to chase the move at current levels.

As we move into next week, the more attractive scenario appears to be waiting for higher-low support before taking on exposure under the anticipation of bullish continuation. While the topside move was fast and furious on longer time-frames, shorter-term charts can afford a greater degree of granularity that may offer a few more levels of interest.

Three such levels exist above the 1.4000 psychological level. The area around 1.4200 had given a lower-high in latter-March, and this level gave GBP/USD a bit of short-term resistance this week as prices were surging higher. This could be looked at as an aggressive level for higher-low support. A bit deeper, at 1.4145, we looked at catching a swing earlier in the week, and this helped to mark the Thursday low in the pair. And a bit deeper, around 1.4097, we have another potential support area that could keep the door open for bullish continuation.