GBP/USD Back to 1.4000 as Super Thursday Looms Large

- GBP/USD has started to pull back after finding resistance at the 78.6% retracement of the Brexit move.

- Price action found support at 1.4000 last week and has quickly returned. Will it hold this time?

Are you looking for longer-term analysis on GBP or USD? Click here for our Trading Guides.

GBP/USD Above Key Psychological Level of 1.4000

It was just a little over a year ago that GBP/USD was dwindling around near 30-year lows around 1.2000. But, as a combination of stronger-than-expected inflation began to show in the U.K. along with a really weak U.S. Dollar, the pair began to move higher. After what looked almost like a begrudging move of strength in Q2, bulls came back with gusto in Q3 to catapult the pair above 1.3500. The fourth quarter produced the first rate hike out of the U.K. in a decade when the BoE moved rates-higher at their Super Thursday event in November. But curiously – the British Pound weakened after that rate hike, likely due to the dovish nature with which the move was delivered, with the Bank of England continuing to harbor pessimistic fears on the basis of a messy Brexit.

That weakness was short-lived, however, as bulls came right back to show support above 1.3000; and that move has pretty much continued with only brief pauses ever since. 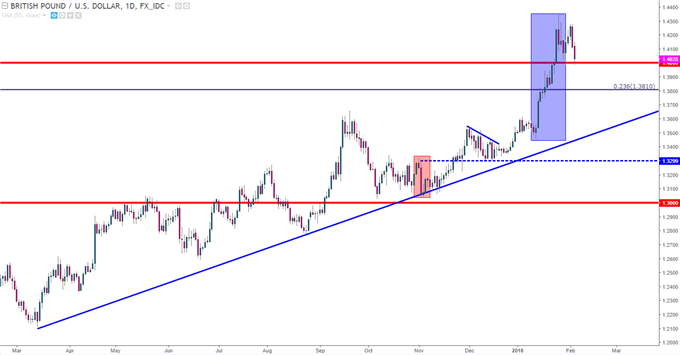 Last week, we looked at the prospect of short-term bearish strategies in light of the longer-term bullish trend in GBP/USD. Given the overbought nature of the pair, combined with a set of lower-highs that had showed-up ahead of Non-Farm Payrolls, a counter-trend setup was produced that has, so far, eclipsed more than 230 pips on the sell-off. But prices are now finding support at a familiar area, the same 1.4000 psychological level that had helped to hold the lows just last week. 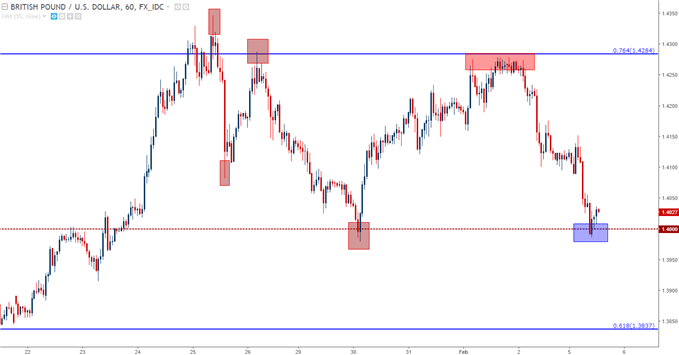 This Week is Big for the British Pound

While this sets up a potential backdrop of bullish continuation, traders would likely want to utlize caution here as price action has begun to soften since tagging the 78.6% retracement of the Brexit move two weeks ago. This level comes in at 1.4351, and this marked the top of the bullish run. Since tagging resistance here, bulls have not been able to maintain any semblance of trend above 1.4300. 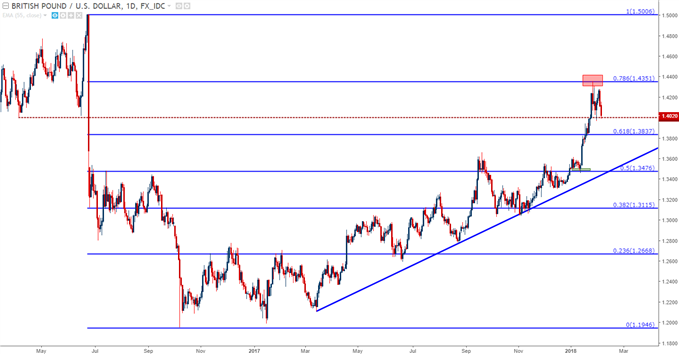 Given the volatile nature with which the pair has traded whilst over 1.4000 combined with a really big piece of event risk on Thursday morning - traders would likely want to wait for a cleaner setup. While 1.4000 could be looked at as short-term support, the fact that bears continue to drive after small bounces should be disconcerting enough to highlight the vulnerability of another re-test of 1.4000.

Instead, bulls can look for prices to trade inside of 1.4000 before plotting those support strategies. The Fibonacci level at 1.3837 could be interesting for such a purpose, as this level had previously offered a bout of short-term resistance but, as of yet, hasn’t shown any element of support. This could also have the luxury of washing out some additional longs as there are likely a trove of stops underneath the psychological level. On the bearish side, justifying risk outlay could be difficult given how far we’ve run off that recent lower-high.