- The British Pound just capped-off what a year that was likely surprising to many, as the currency gained 9.33% against the U.S. Dollar in 2017.

- The prospect of continued strength in inflation combined with a brutal amount of uncertainty around the U.S. Dollar can keep that theme of Cable strength as an attractive theme for FX traders.

Last year closed in a rather positive fashion for the British Pound, as the currency was up by 9.33% against the U.S. Dollar in 2017. This, of course, was marked by considerable USD-weakness throughout the period; and so far in 2018 that theme has continued as GBP/USD is holding support above the key psychological level of 1.3500. The trend channel that started off of the March lows remains, with price action currently sitting in the lower-half of this area while garnering a bit of support off of a prior region of swing-high resistance. 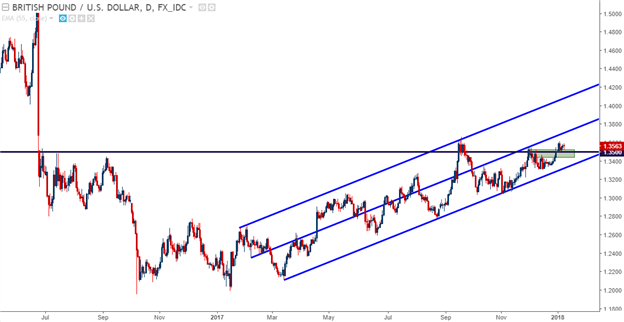 While the general trend in the pair was higher throughout last year, it was not without struggle. There were multiple periods in which price action moved in a rather messy, chaotic fashion; and this likely has to do with the burgeoning fundamental themes pertinent to each side of the currency pair. In the U.K., Brexit continues to remain a concern, and we’re seeing this coupled with higher rates of inflation along with the potential for tighter policy out of the Bank of England before the end of this year. In the U.S., questions abound concerning Fed policy as the world ushers in a new Fed Chair at the end of this month when Mr. Jerome Powell takes over the top spot at the bank. And this doesn’t even make mention of tax cuts or fiscal policy in the United States, which can also continue to be a driver in and around the U.S. Dollar.

After a burst of strength to close out the year saw the pair eclipse the key psychological level of 1.3500, prices have been moving in a sideways manner with little directional drive. A retracement coupled with higher low support above last week’s swing-low of 1.3493 can keep the door open for bullish continuation strategies; and this support zone can be extended up to 1.3520 to incorporate a couple of swing lows that printed in the latter portion of last week. This could enable traders to look at profit targets and break-even stop moves on a revisit of near-term resistance around 1.3585. 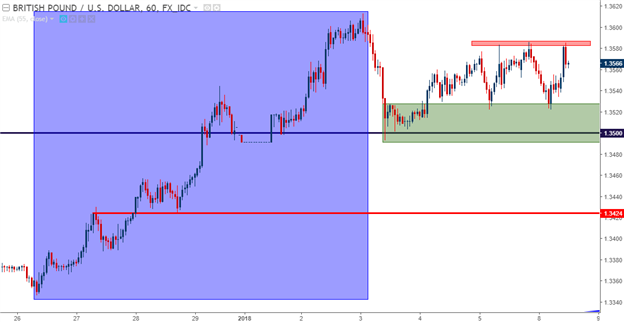