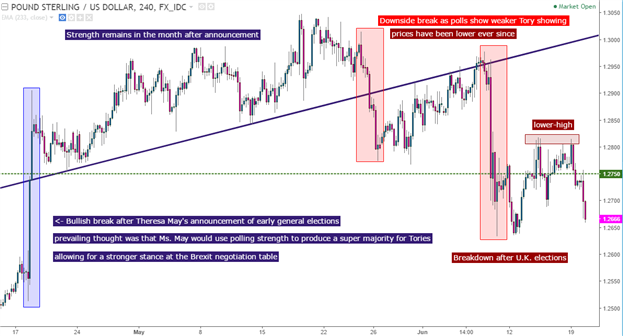 - GBP/USD had a flicker of strength last week on stronger inflation and a more-hawkish BoE; but that merely produced a revisit of resistance before sellers took back-over.

Just last month it appeared as though the British Pound had bullish potential. After the topside breakout in mid-April after Ms. Theresa May’s announcement of early elections, GBP/USD broke above the price of 1.2750. And in the weeks following, that strength remained as buyers continued to prod the pair higher, with price action eventually revisiting the vaulted 1.3000 level, which hadn’t been seen in Cable since before the ‘flash crash’ of early October.

But as we neared the end of May, something unexpected happened: Polls began to show that Theresa May’s Tory party may not fare all too well at that upcoming election. This threw a heap of fresh uncertainty around the already cloudy situation of Brexit; and when the election took place two weeks ago, Theresa May’s gambit failed as the Conservatives actually lost seats from the venture, forcing the new PM to form a coalition in order to stay in power, and this puts the U.K. in a weakened positions as Brexit negotiations kick off this week.

Election uncertainty appears to be a direct negative for the British Pound, and as those election results were coming-in, GBP/USD broke back-down into the prior range by piercing below 1.2750. On the chart below, we’re focusing in on how dynamics around the recent election have helped to shape GBP price action:

The Tone has Shifted

Last week produced a Bank of England rate decision that saw the most votes for a rate hike since 2011, as three members of the MPC dissented when the bank held rates flat last week. This is in response to the 2.9% inflation print from earlier last week, and this, collectively, is a very bullish set of data points. This is also something we’ve been looking at for a while now, as higher levels of inflation were a near-certainty after the ‘sharp repricing’ in the value of the British Pound and, eventually, the Bank of England would need to respond by looking at ‘less loose’ policy options.

But rather than kicking off a fresh bullish trend, these strong points of reference merely brought GBP/USD up to a ‘lower-high’ before sellers came back-in to play, and this illustrates the shift in tonality in GBP/USD after U.K. Elections. Earlier this morning, BoE Governor Mark Carney spoke to last week’s BoE rate decision, as he essentially ruled out the possibility of a rate hike, and this kicked the British Pound even-lower. 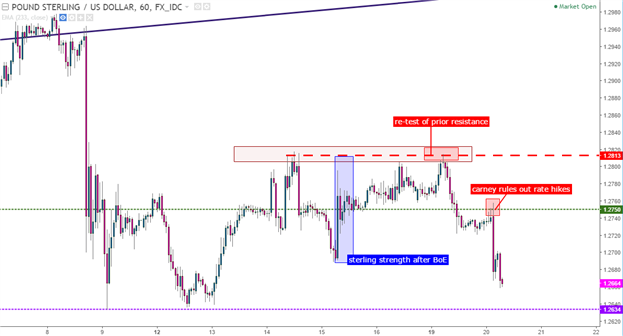 At this point, the British Pound is bearish with potential for even-more. There are a variety of ways to look to gain short exposure here, but given that GBP has already seen a rather strong push lower this morning, traders will likely want to wait for some additional confirmation before taking on risk. 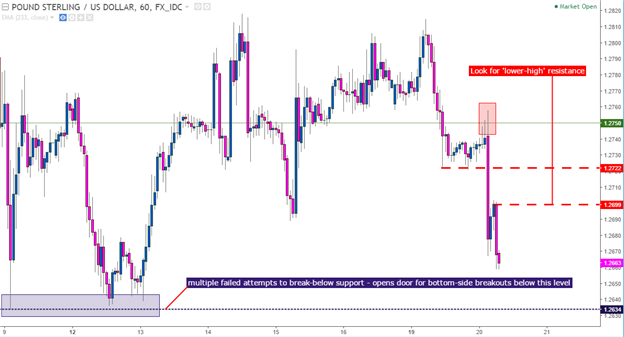